DST’s Alien Minimates have a brand new set that fans of the original film will want to check out at Hastings. 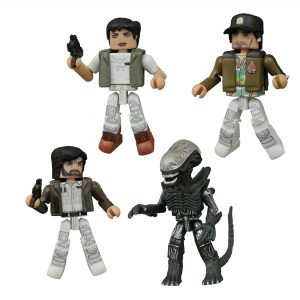 Not offered in your usual two-pack format, this new set of Alien Minimates includes three brand new characters from the film, and a new look at the Big Chap himself, the movie’s xenomorph. And this the title of ‘The Crew of the USCCSS Nostromo”, you can imagine who that might include.

The ship’s captain, Dallas, is the headliner, and he’s joined by navigator Lambert, engineer Brett, and of course – that xeno. While I’m a way bigger fan of the film’s sequel Aliens, this xeno is actually my favorite of the whole series. That clear dome, which covers the eyeless human-like skull (sourced from the human DNA used to build itself off of) just does it for me.

The pack is available right now, and exclusively at Hastings online store. It’s not alone either, as there’s also a glow-in-the-dark Alien bust/bank at Hastings for sale. It’s the same as DST’s standard Alien bust/bank, but it’s all glowy and stuff, and is therefor way cooler.

Jason's been knee deep in videogames since he was but a lad. Cutting his teeth on the pixely glory that was the Atari 2600, he's been hack'n'slashing and shoot'em'uping ever since. Mainly an FPS and action guy, Jason enjoys the occasional well crafted title from every genre.
@jason_tas
Previous EA Launches Origin Access On PC
Next Titanfall 2 officially incoming