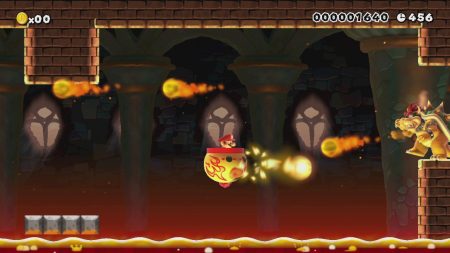 If you’ve run out of inspiration for new levels in the stage-creator we called more than just a toolbox, then the newest set of options may be just what you’re looking for.

A Fire Koopa Clown Car comes with new offensive capabilities that will even let players destroy blocks blocking their progress.  P Warp Doors only become visible once a P Switch is activated, allowing creators to make hidden routes to add even more length to their Metroidvania stages, and a Bumper even sends Mario bouncing away.

Equally exciting are the two new additions that change less how you make stages and more how you play them: World Records will show the fastest clear time for each stage, giving you something more to strive for when a monstrously difficult stage has been beaten.

And the previously announced Super Mario Maker Bookmark Web portal (accessible via Computer, Tablet, or Smartphone-and probably anything else with a browser) will let you find stages to play while at work or in transit and queue them up for when you arrive home.  The portal site will include a variety of search options based on difficulty or type (automatic or music stages, for example).  You’ll also be able to search on your Wii U.

This new set of content launches on December 21st, and in the Nintendo fan tradition, I’ll ask the question on all of our insatiable minds:

Brutal Gamer's Nintendo Editor began his gaming life a little late- at five years old. But he's made up for it in the two decades since, gaming and writing about gaming with the same passion, fervor, and unrelenting love as his five-year old self.
Previous Nintendo Download Loaded With Mega Man
Next Dark Horse to publish third Masters of the Universe tome