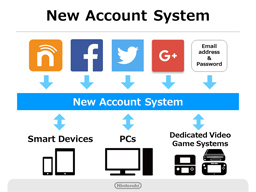 Nintendo’s investor meeting last night may not have been streamed to the public, but it came with tons of new details none the less.

For starters, Nintendo has announced their new account system, Nintendo Account.  Players will be able to sign up for it using anything from facebook to their NNID, and use it across smart devices, PCs, and their Nintendo Game Systems.  They are “focused on making the new account easy to create or easy to sign up as well as easy to use.”  Ideally, to make it “harder for members to forget about it.”

As you know, Nintendo has discussed “maximizing” the value of their IP, to bring people to their dedicated gaming consoles, as well as ensure they remain a household name in a time when kids are growing up on their smart devices, and making sure people are constantly connected to the Nintendo Account seems to be one way to do that.

But what does the Nintendo Account mean for the actual player?  You’ll be able to buy downloadable software for the Wii U and 3DS via the Nintendo website, as well as personalized messaging from Nintendo characters about information or add-on content related to a game.  Also, they “may also send a message that enables the recipient to purchase some software at an attractive price point on his or her birthday.”

There will similarly be a new “point program system,” wherein players receive points for purchasing and playing games- points that can be spent on digital content, original merchandise, and discount coupons.  This applies to content on the Smart Devices as well as games on the gaming consoles.

You can also “establish ‘Friend’ relationships,” presumably like you can already, only across all platforms (PC and Smart Devices included).  In the future, Nintendo hopes to be able to allow game save data to be stored in the cloud.  Also, Nintendo plans to supply these benefits at theme parks, movie theaters, and retail outlets, where their IP will be on full display (presumably).

This new membership service is being dubbed “My Nintendo,” and will “work as a bridge between dedicated game systems and smart devices.” 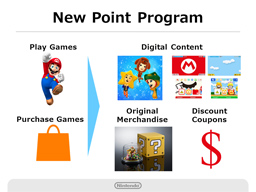 The system will be launched alongside Nintendo’s communication application, Miitomo, in March 2016.

Miitomo is an app wherein players use their Mii characters to represent themselves.  These Miis will converse with you to better learn who you are, and then share this information with other people.  Nintendo suggests “you might see a side of your Friends you didn’t know about!”

The idea is that people will learn things about each other that might not be brought up in daily conversation (especially by shy people) that will act as “friendly conversation starters,” and possibly drive people to “deepen friendly relationships and have more people with whom you can play games.”

While Miitomo isn’t the full-fledged game many people were hoping for, it seems like a pretty nifty conversation app.  It’ll be interesting to see if it can have enough impact in any market when up against things like facebook, Twitter, Snapchat, and AOL Instant Messaging

The reason for Miitomo, as opposed to something like Virtual Console Games on the iPhone, is because Nintendo is focused on three main objectives:

Nintendo expanded on their Smart Device Business Policy by promising not to “exclude any IP as a candidate,” to release about five titles by March 2017, and that while they will aim for “global deployment,” some IP will only be released in specific countries.

It’ll be exciting to see how all of Nintendo’s new pillars of its ecosystem, between Smart Device apps, My Nintendo, the NX and rigorous licensing of its IPs (including theme parks and video content), come together in the near future.  All told, I’m pretty excited to start earning rewards for playing Smash Bros for another thousand hours with My Nintendo, and I’m honestly glad Miitomo acts as the bridge it’s supposed to between the casual observer and the Nintendo console owners, rather than as a title that 3DS owners can only wonder why it wasn’t released on their system of choice.

Brutal Gamer's Nintendo Editor began his gaming life a little late- at five years old. But he's made up for it in the two decades since, gaming and writing about gaming with the same passion, fervor, and unrelenting love as his five-year old self.
Previous Special Halloween room opens up in Layers of Fear, adds special prize
Next Nintendo Download Underwhelms Late October