You might be aware of the fact that there’s an Evil Dead show hitting the air thanks to Starz Channel, but the network is going all out for the debut of the show and the upcoming Halloween holiday with a marathon of the movies. 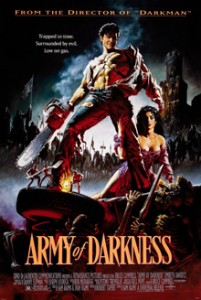 You’ll have to wait till October 31st to see the first episode of Ash vs The Evil Dead (which’ll air at 9pm eastern and pacific), but you can get up to speed on the history of the horror turned horror/comedy series the night before the launch of the new show with Starz’ marathon of the classic movies.

Things start off  on the cable channel with the original Evil Dead movie, which is straight-up horror for the most part, before flipping into the more comedic Evil Dead II (which is kind of a remake of the original), and then wrapping up with the downright funny Army of Darkness. If you love the series, this is a night that you don’t want to miss out on even if you’ve seen the three movies a hundred times over. Why’s that? Because the whole series is being capped off with a sneak peek at Ash vs The Evil Dead (at 12:15am eastern and pacific), so you can see what’s new in Ash’s world the night before you check out the first installment.

Here’s the time list and the descriptions of what’s on tap:

Oh, and while you’re watching, make sure to catch the special hashtags that’ll be popping up here and there to join in on the party on social media, including the all-encompassing #EvilDeadMarathon tag.

Jason's been knee deep in videogames since he was but a lad. Cutting his teeth on the pixely glory that was the Atari 2600, he's been hack'n'slashing and shoot'em'uping ever since. Mainly an FPS and action guy, Jason enjoys the occasional well crafted title from every genre.
@jason_tas
Previous Bethesda debuts awesome Fallout 4 controller
Next Fallout 4’s S.P.E.C.I.A.L. series finishes out with Lady Luck