Dark Horse’s latest series starring the revamped version of video game hero Lara Croft is on the way, and writer Mariko Tamaki will be making sure it’s one that you’re going o want to pick up every month. 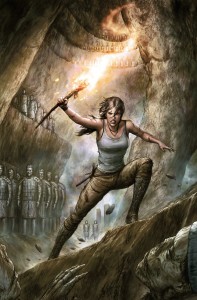 “Mariko Tamaki’s writing is impactful and emotionally resonant,” said series editor Patrick Thorpe. “When I was researching her work for Tomb Raider, I read This One Summer cover to cover and said to myself, ‘That was perfect.’ Since becoming an editor, I don’t know that I’ve ever said that.”

“I am thrilled to be given the opportunity to write up some adventures for Lara Croft. I feel like I’ve just gotten this new, incredibly daring, strong, valiant friend, and now I get to think up super-cool stuff for her to do,” said Mariko Tamaki. “And she has to take me with her. And we can go anywhere, and do anything? Right?! What could be better than that?”

You might know Tamaki already, as she made a splash with Jillian Tamaki on the book This One Summer, though this’ll be her first go at the adventures of Lara Croft. The writer will be casting the Tomb Raider into a brand new and wholly original series of adventures that’ll take her through “new set of challenges, exotic locations, and—of course—tombs” according to Dark Horse.

Tamara brings some serious cred to Croft with this new series, and to put it frankly, if you’re a fan you’re probably not going to want to miss checking this one out. That’s something that you’ll be able to do in February of next year, which is when issue #1 lands on the racks.

Jason's been knee deep in videogames since he was but a lad. Cutting his teeth on the pixely glory that was the Atari 2600, he's been hack'n'slashing and shoot'em'uping ever since. Mainly an FPS and action guy, Jason enjoys the occasional well crafted title from every genre.
@jason_tas
Previous Berkeley Breathed’s Bloom County is Back!
Next NYCC 2015: Dark Horse announces murder and conspiracy from creator Van Jensen