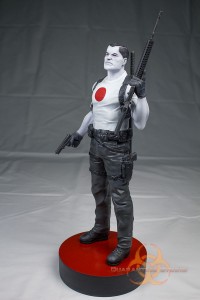 This milestone collectible comes riddled with detail from the base of Bloodshot’s boots to the top of his assault rifle and will be produced in a limited edition of just 300 statues worldwide.

Brought back from the dead and infused with cutting-edge nanotechnology by private security contractor Project Rising Spirit, Bloodshot is a nearly unstoppable killing machine.  Created by Kevin Vanhook, Don Perlin, and Bob Layton in 1992, Bloodshot is one of  the most successful new comic book characters of the past two decades.  After returning with a sold-out new series in 2012, Bloodshot’s latest chapter began in the pages of Bloodshot Reborn.

Arm yourself for the armor-piercing debut of Project Rising Spirit’s deadliest creation as a highly detailed collectible with the Bloodshot by David Aja limited statue.