A chance to preview some of Faith’s past. 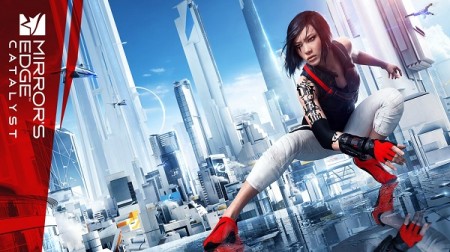 The first Mirror’s Edge game came out back in 2008, and it was an enjoyable, well received first person free running adventure where the focus was on getting to your destination while trying to avoid combat as much as possible.  The combat was a weakness of the game, but it was mostly avoidable if you were good enough.  A second Mirror’s Edge game was finally announced in 2013, and thing’s have been fairly quiet overall, but Mirror’s Edge Catalyst, the prequel to the original game, is just around the corner, and we got to play it for a little while.

Mirror’s Edge Catalyst starts with Faith being released from a correctional facility, her original sentence being increased due to her being unco-operative.  Once she’s out of the facility, she is immediately recruited to the Runners, and that’s where the story starts.

Catalyst adopts a more free roaming world than it’s predecessor, and the demo at EGX showcased this world slightly, with three side objectives to try.  There’s a speed run mission, where the objective is to complete a set route across the rooftops as fast as possible.  Then there’s a delivery mission, which involves taking a shipment from one point to another, taking out all the police guards along the way.  The third is a Billboard Hack, where you have to make you way up to a billboard and change the messaging on it.

The first thing that hit about the free running is just how much smoother the experience is compared to the first Mirror’s Edge.  Moves and transitions seem to chain together better and you don’t get frustrated by missing jumps and vaults you really think you should’ve hit.  Runner vision is back in this game, which turns certain elements of the environment red to show you where you should go.  This extends to when you set waypoints as well, with red surfaces showing the way.

The biggest single improvement, however, is the combat.  Faith isn’t able to use weapons this time around, but melee attacks can now be performed contextually to Faith’s situation.  So, if you slide under a gap with a guard on the other side, you’ll take their legs out from under them.  If you wall run and leap off, you’ll kick the guard in the head.  It all flows together really nicely and makes for some satisfying moments.  Standard melee is also available and Faith can take a bit more damage from bullets this time around, which is nice.

We only got about 13 minutes of game play, but from what we’ve played so far, Mirror’s Edge Catalyst is looking like the game Mirror’s Edge could and probably should have been, with the major frustrations ironed out.  Hopefully the entire game is able to deliver on this promise.

Mirror’s Edge Catalyst is due for release on PC, Xbox One and PS4 on February 23rd (North America), February 25th (Australia) and February 26th (EU).

Mike is Brutal Gamer's Indie Editor. He has been playing video games since the early 90s and is fond of racing games, puzzlers and MMOs. Typing /played while in WoW makes him cry, but not enough to stop him playing some more.
@Ognawk
Previous EGX Hands-On: Steamworld Heist
Next EGX Hands-On: Unbox