There’s Big Trouble in Little China and a special Re-Action figure of the film’s baddie is in the August issue as Lo Pan’s ghost. 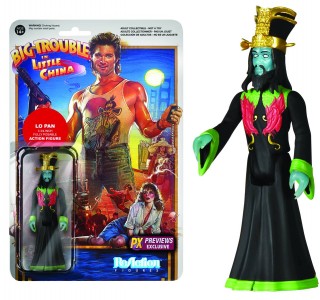 If you collect Re-Action figures from Funko, then you already know that the line is growing almost as fast as the company’s super-popular Pop! series of vinyl figurines. With loads of properties on board for the retro-inspired toy line already, it’s starting to bulge with licenses from some of the biggest and most niche areas of fandom.

And one film that fits the latter of those categories is most definitely Big Trouble in Little China. The Kurt Russell-starring action movie that hit theaters back in the 80s is about to get a remake (starring Dwayne Johnson), and remains a perennial favorite of fans. There’s a full series of figures for the flick too, which are a part of the Re-Action line.

Decidedly not a part of the basic series though is the ghost of Lo Pan. The main villain from the movie, Lo Pan’s other-worldly form is finally here though, and he’s pretty freaking awesome. Featuring a glow-in-the-dark paint job, Lo Pan stands in at the standard Re-Action 3.75 inch height, and has a pretty nice amount of detail (even his long fingernails)- especially for a Re-Action figure, which are meant to mimic the Kenner toys from the 70s and 80s.

Available for pre-order from your local comics shop right now (via Previews magalog), Lo Pan will ship out next month (September).

Jason's been knee deep in videogames since he was but a lad. Cutting his teeth on the pixely glory that was the Atari 2600, he's been hack'n'slashing and shoot'em'uping ever since. Mainly an FPS and action guy, Jason enjoys the occasional well crafted title from every genre.
@jason_tas
Previous Vote to Play for PS Plus Starts Today
Next Resident Evil 2 remake confirmed by Capcom