Ready to deftly avoid being hit with a toy train, Diamond Select Toys’ figure of Paul Rudd’s Ant-Man is officially available in stores. 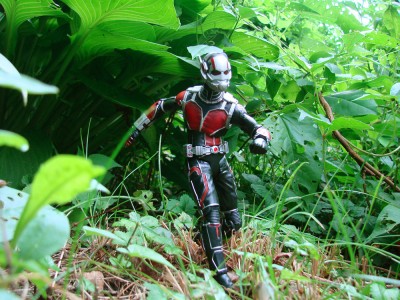 Fresh off the opening of the movie that bears his name, which did fairly well at the box office (earning a solid $234 million globally), this plastic incarnation of the title character is looking pretty awesome. Cast in the usual Marvel Select 7″ scale, the film version of Ant-Man has 16 points of articulation and the usual top notch paint apps that you’d expect of DST.

He’s also got interchangeable hands, to better create different poses, and a little shrunken Ant-Man to replicate the character’s size-changing abilities. Sculpted by Gentle Giant, Ant-Man is ready to be added to your collection right now for $24.99 USD.

Jason's been knee deep in videogames since he was but a lad. Cutting his teeth on the pixely glory that was the Atari 2600, he's been hack'n'slashing and shoot'em'uping ever since. Mainly an FPS and action guy, Jason enjoys the occasional well crafted title from every genre.
@jason_tas
Previous The Nintendo Download brings Super Smash update and more
Next Gamescom 15: Star players make all the difference in Blood Bowl 2