There are a few gems this week to add to your collection, including the second Gods and Monsters one-shot from DC, featuring Wonder Woman. 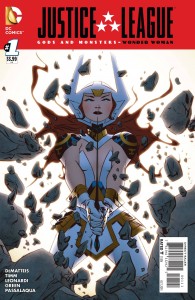 Last week, it was Superman, and this time around the alternate universe Wonder Woman has her day in the sun with a one-shot issue telling her background in the Gods and Monsters universe created by Bruce Timm. Timm is, of course, best known for basically creating the DC Animated Universe from the 90s that spilled into the new millennium with the Justice League cartoon series. Simply put, he knows what he’s doing and he’s built a whole new universe to play in with Gods and Monsters, which re-envisions all the DC heroes and villains in brand new ways.

Wonder Woman here for instance, is a New God and not an Amazon. She joins the son of Zod (Superman) and the vampiric Karl Langstom (Batman) as a way more anti-heroic version of the Justice League in the animated movie that just hit DVD and Blu Ray. These single issues are an expansion on that film, which has already captured more than a few fans. Where it goes after this, who knows, but these issues are the building blocks for what could be a pretty popular new franchise for DC. Oh, and of course they seem really good too. Don’t miss ’em.

If you’re not into Gods and Monsters though, there’s plenty more to like this week, including more Secret Wars, the final issue of The Witcher: Fox Children, Darth Vader #8 and more. Scroll down to see my full list of picks for today, and make sure you click here to see the full catalog of what’s available on Previews website.

Jason's been knee deep in videogames since he was but a lad. Cutting his teeth on the pixely glory that was the Atari 2600, he's been hack'n'slashing and shoot'em'uping ever since. Mainly an FPS and action guy, Jason enjoys the occasional well crafted title from every genre.
@jason_tas
Previous Gamescom 15: Just Cause 3 burns up consoles and PC’s this Holiday
Next Gamescom 15: Big time heists coming to Battlefield Hardline