Home / News / Gamescom 15: Battle alongside a dragon in Scalebound

Gamescom 15: Battle alongside a dragon in Scalebound

Platinum Games’ Scalebound features a massive beastie that you’ll battle alongside and even fly on the back of. Oh, and you can also transform into a dragon-man. 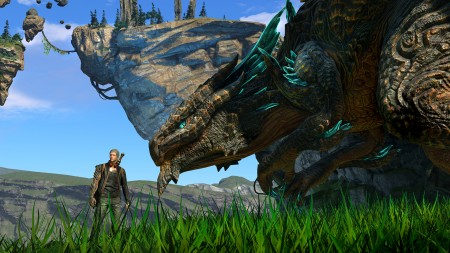 More from the Xbox briefing at Gamescom today, as action developer extraordinaire Platinum Games (Bayonetta) gave gamers and attendees a solid look at Scalebound. The game looks fantastic visually, and feels like something pretty different thanks to the fact that you can actually fight alongside of a monstrous dragon.

You buddy can accept commands, tearing down structures and enemies (some of which are pretty kaiju-esque themselves) and generally toasting everything in sight. We also saw footage of flight segments, though it’s a little hazy as to whether you’ll actually get to play any of that, or if it’s all just cut-scene stuff.

As for the gameplay, you know what to expect from Platinum- tons of fast-as-lightening action, this time punctuated with swordplay galore. You can also morph into a dragon-man… thing in this one, and gain extra powerful attacks as you’ll have to tackle giant monsters too, not just leave ’em to your scaly pal.

No release date for Scalebound as of yet, but the Xbox One exclusive is looking sharp as a dragon’s tooth so far.

Jason's been knee deep in videogames since he was but a lad. Cutting his teeth on the pixely glory that was the Atari 2600, he's been hack'n'slashing and shoot'em'uping ever since. Mainly an FPS and action guy, Jason enjoys the occasional well crafted title from every genre.
@jason_tas
Previous Gamescom 15: Quantum Break stops time at the Xbox presser
Next These DC Comics wallets are Bombshells