Bloodshot Reborn #5 goes to… the Squirtverse.

Well. It doesn’t sound very appetizing, but the fifth issue of Valiant’s excellent Bloodshot Reborn comic is heading to a horrible little place called the Squirtverse. 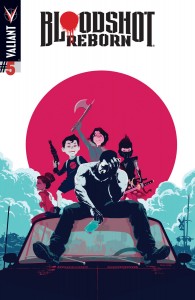 Valiant is proud to present an advance preview of BLOODSHOT REBORN #5 – an essential standalone issue at the heart of the year’s critically acclaimed new ongoing series from New York Times best-selling writer Jeff Lemire (THE VALIANT, Descender) and special guest artist Raul Allen (Hawkeye)! Enter the hallucinatory world of Bloodshot’s demented cartoon sidekick as Bloodsquirt takes charge for trip into a realm beyond our own reality…a realm populated by other dark reflections of the Valiant’s greatest heroes…a realm that some dare to call the Squirtverse!

The memories of the thousands of people he killed as Bloodshot aren’t the only things that haunt Ray Garrison. For months now, the specter of the Geomancer and a nightmarish cartoon known as Bloodsquirt have tormented him at every turn. First, on his television…and now in the real world…where Bloodsquirt acts out twisted fantasies that darkly mirror Bloodshot’s own violent past. Are these apparitions real or a just figment of Bloodshot’s broken psyche? And just who are the other members of Bloodsquirt’s “Squirt Squad”…and what could they possibly be planning next?

I still can’t get over that name… Anyway, the whole Bloodsquirt thing is little disturbing in it’s own right. Sure there’s the name, but besides that, we still don’t really know what Bloodsquirt is. All signs point to him being a hallucination of Ray’s now drug and booze-addled mind, but is that really the case?

He could pretty easily also be a byproduct of the nanites themselves, those little robots that made Ray into Bloodshot in the first place. Once the Geomancer removed them, he went back to being real;actively normal, but now that they’re diffusing back into him with every ‘infected’ person he defeats, well, he very well might be well on his way to becoming the killing-machine he once was. The question is, what happens to Ray Garrison once that happens?

Find out the answers to some of these questions (maybe) when Valiant’s latest jumping on point hits this August the 5th, with Bloodshot Reborn #5 from the team of Jeff Lemire and guest artist Raul Allen (who you probably know from Marvel’s Hawkeye book).

Oh and, just so you know, one of the variant covers for the issue is QR capable, so you can actually hear a random line voiced by Bloodsquirt (voiced by Valiant letterer Dave Lanphear), when you hold your QR-enabled phone up to it. Have fun!

Jason's been knee deep in videogames since he was but a lad. Cutting his teeth on the pixely glory that was the Atari 2600, he's been hack'n'slashing and shoot'em'uping ever since. Mainly an FPS and action guy, Jason enjoys the occasional well crafted title from every genre.
@jason_tas
Previous The eShop gets artistic this week with Art Academy
Next First Impressions: Reflections