Is the Marvel U big enough for two Spider-Men? Probably, but you’ll find out this Fall as Spider-Man hits the stands with Miles Morales in the lead role. 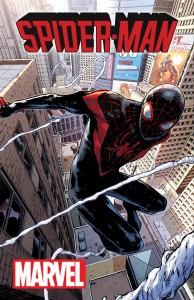 “Four years ago, we peeled back Spider-Man’s iconic mask to reveal a new and different face, and readers of all stripes have embraced him,” says Marvel Editor-in-Chief Axel Alonso. “I’m excited to announce that Miles Morales is here to stay – and this Fall, he’s going to be swinging through the heart of the Marvel Universe. Can new friends and enemies be far behind?”

“This is a very big deal to [Sarah and I],” says Brian Michael Bendis in an interview with Marvel.com. “For [Miles] to have grown up and flat-out earned his place in the Marvel Universe, as Spider-Man, is frankly so much more than we could have hoped for when we first sat down to design him and his life. When it became clear that I was going to follow Miles into this new adventure I was really hoping that Sara would see the value in it being both of us that do this together. I was thrilled that she agreed immediately.”

First, Sarah is Sarah Pichelli, who co-created Morales alongside Bendis in the Ultimate line of Marvel books a few years back. With that line folded into the Marvel U proper after Secret Wars, she’ll be joining Bendis on the new book, which is simply titled Spider-Man.

Now don’t worry, Amazing Spider-Man will still feature the off-kilter antics of your friendly neighborhood wall-crawler Peter Parker, but this book will be all Morales. The story should be an interesting one too, as the book will lamely explore how this extra-universal guest becomes a permanent resident of Earth-616 after this Summer’s event series, and how he copes with that, as well as a whole new world of heroes and villains to deal with. And of course, being one of two Spider-Men. that’s gotta be weird too (especially since his version of Pete was dead and buried before he put no the webs).

Longtime Marvel fans might recall though, that this isn’t the first time that a character from another part of Marvel’s Multiverse has made the journey into the mainstream Marvel U. Age pf Apocalypse in particular, saw a bunch of heroes and villains make the leap to varying degrees of success.

This also isn’t the first time that there’s been a ‘Spider-Man’ book on the racks. Debuting in the 1990 with Todd McFarlane’s epic run, Spider-Man originally starred Parker and ran till ’98 with a run that included 98 issues. Why it’ll be a little odd seeing a book with that title not starring the usual web-head, it is pretty cool to see it on the racks again, especially with such a lengthy absence.

Spider-Man #1, with story by Bendis and art and cover from Pichelli, hits stores this Fall.

Jason's been knee deep in videogames since he was but a lad. Cutting his teeth on the pixely glory that was the Atari 2600, he's been hack'n'slashing and shoot'em'uping ever since. Mainly an FPS and action guy, Jason enjoys the occasional well crafted title from every genre.
@jason_tas
Previous ZombiU rebranded as Zombi, looks to be coming soon
Next New Arkham Knight trailer promises the death of the Batman