Sex, monsters and an epic world to go with it, what more could you want? The Witcher 3: Wild Hunt is one wild ride.

The Witcher 3: Wild Hunt is the third and final game in the story of the titular character, Geralt of Rivia, and features a vast open world with a meaty lore and side-quests galore! Poor rhyming aside, while the game itself is the culmination of years of development and hype, worth noting is its unsurprising depth and improvement compared to the previous entries in the series. Though they are all great in their own right.

The Witcher 3 is a graphically impressive game, and everything looks wonderful. From the well-choreographed fighting style of Geralt, to the impressive landscapes, to the horrid and grotesque monsters, everything is designed with what I can only describe as a Master’s touch. The buildings and their European-esque designs are worth a mention too, for they represent a portion of the depth with which the developers took the time to research and study various designs to make the game look and feel as realistic as possible.

A lot of the game’s content is very well animated. The cutscenes in particular are a sight to behold, and watching Geralt and company traverse the world CD Projekt Red made a reality for us, is a treat for any RPG fan, whether or not this is their first Witcher game or their last. What I particularly enjoyed, is the way the cutscenes interject with crucial moments of the game making it a wonderful cinematic experience. And what sets The Witcher 3 apart is the inability of the player to sometimes differentiate between a cutscene and the actual gameplay. Yup, the game looks that wonderful. 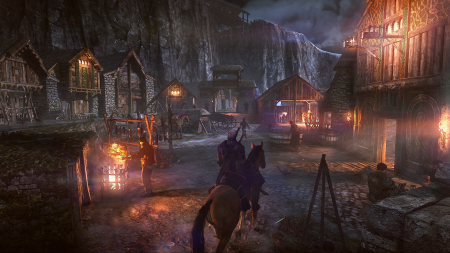 Honestly speaking, to view the Witcher in all of its glory requires quite the powerful rig and to be able to enjoy The Witcher 3 the way it was meant to be played on Ultra is something that I can only hope for myself. However, having the game on the medium settings still made it look better than majority of the games released right now- and that’s saying something.

The character designs are as beautiful as they ever were too, if not improved upon these past couple of years. I like the realism in the characters, from the battle-weary Geralt to his beautiful lovers (and there are many, trust me) and especially the monsters. Man, this is the first time I have ever felt fear in hunting down beasts and demons and witches of the night in a game. The scariest part about the monsters is that, while they look real, they also feel real. It’s as though they really are things which could exist in our world and to make your monsters feel alive and breathing is quite the achievement and treat for us RPG gamers.

The Witcher 3 is the epitome of western RPG and should serve as an example for future games. This is how RPGs are meant to be played. Sure they can look beautiful, but they have to play and feel wonderfully too. Give your players the opportunity to traverse a world as beautiful as it is cinematic and boom, you’ve got a wonderful RPG on your hands.

Speaking of a cinematic experience- the music! The music in Witcher 3 is quite possibly one of the best soundtracks ever for an RPG game. I like the authentic dark fantasy feel in most of the songs and hearing them as they supplement the already impressive game with violins and that bass line (man, that bass line!) is quite the experience. Some versions of the game come with The Witcher 3’s official soundtrack and luckily for me, I got the opportunity to own a soundtrack for myself. I sometimes listen to some of the songs to psyche me up when I’m writing or doing anything dull, and feeling like Geralt on one of his adventures on a hot summer day is one of the best experiences ever.

So what does this mean? Is the music only good to lighten things up? Nope. The music actually gets you in the world of Geralt. It stimulates your senses and simulates a European fantasy setting within the confines of your mind, and supplements your gaming experience by a whole lot. Sure, I could play The Witcher 3 on mute and enjoy it for the dialogue (subtitles) and the visuals and still rate this game highly, however the entire Witcher 3 experience is one big soufflé of perfect and hand-chosen ingredients crafted into one beautiful end product, and the music is the cherry on top. 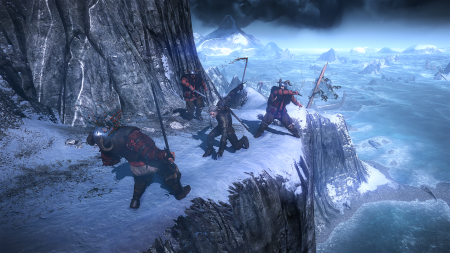 While the aesthetics are awesome, The Witcher 3 wouldn’t be complete without its wonderful story. Of course, the Witcher is originally a series of fantasy books with its own lore, bestiary and storyline, and Wild Hunt ends the Geralt storyline which began with Witcher and continued into Witcher 2: Assassins of Kings. What sets these stories apart from the other fantasy novels out there is the complexity and depth of the characters and the realism of their inner struggles.

Witcher’s premise is simple. You’re Geralt, and after years of being used and abused you are now on a much more personal journey. If that didn’t make a whole lot of sense to you, I recommend that you stop reading and immediately start playing the first two games. They are just THAT good to pass up and the Witcher’s conclusion won’t have much of an impact if you are left unaware of what went down with Geralt, Yen, Triss and the others if you know what I mean.

The story alongside the already impressive fantasy world that was created and perfected in the original novels is adapted perfectly by CD Projekt Red. Witcher 3 has depth and content and maybe even more so than other RPGs out there, and that’s saying something. The storyline, as stated above, is essentially Geralt’s story, and his ending is one for the books! (No puns intended). Supplementing that already impressive storyline is a boatload of content in the form of the in-game Encyclopedia and Bestiary. There’s a ton of locales, flora and fauna, and of course monsters to get to know in the world of The Witcher 3, and collecting or completing the Witcher 3 compendium which is sure to make the completion junkies in you happy. 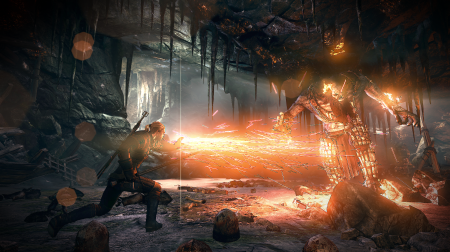 The characters are among the best facets of the game. They’re all so well-written and beloved that one cannot discount the fact that, if not for the interesting stories of Geralt, Yennefer, Ciri and everyone else that’s along for the ride, then The Witcher series probably wouldn’t be as successful today. CD Projekt Red has given life to these beloved fantasy characters and I thank them for it.

Of course, majority of the voice cast from the previous Witcher games have returned to lend their velvet tongues once again to this awesome series. I’m really a stickler for voice acting, really I am, and the talented folks who worked on The Witcher delivered some of the most convincing lines I have ever heard. From Geralt’s ‘I’m too old for this… poop’ feel to even the most basic of grunts from any of the other characters, everything is well done and well made.

Gameplay remains mostly unchanged from the previous games, but I have to say that it certainly feels different – in a good way. The combat mechanics feel better and smoother than ever before and seamlessly transitioning from using alchemy to fighting with your Silver Sword (or Steel Sword, for that matter) feels smoother and better than ever before. Geralt (and Ciri in some instances) moves smoothly, fighting like a master, and the combat mechanics are as good as they have ever been, maybe even better. 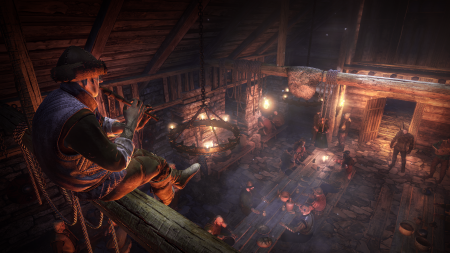 There are some additions such as horseback riding, using a crossbow, swimming and a whole lot of other things. Mixing up a few aspects from the older Witcher games with a bunch of newer gameplay mechanics similar to the Assassins Creed series should prove to be interesting for both new and old Witcher fans, enabling everyone to better create a fighting style suited and unique only to yourself. The rest of the controls remain mostly the same, however they also feel better and more responsive than before. This could be a result of the overall glitter effect that the Witcher has to offer but everything about the game shouts ‘better than ever!’ if I may say so myself.

Of course, crafting, side-questing, and wooing the fairer sex are all part of the game, and doing all of this in a map that is significantly bigger than the older Witcher titles? Gold. Crafting in particular feels and plays even better this time around. I’ve had a glorious time collecting plants and loot just so I could craft the perfect strengthening potion or the most awesome armor set my level could afford to build. My thoughts are that the side quests and various collectibles should give the overall playtime a good 130 hour boost – if you intend to collect everything. All in all, the Witcher boasts a theoretical 100+ hour gameplay value – and this is coming from a guy at the 60th hour mark mind you.

Finally, replay value. There’s so much to do in one play through that I doubt a second one would be necessary unless you truly want to complete everything there is to complete in The Witcher 3, but hey, who could blame you? With a game this good, playing it 2 or 3 times (provided you have the time) shouldn’t be a problem.

I was a skeptic at first CD Projekt Red, really I was, but this game has turned me into a believer. The Witcher 3: Wild Hunt is one of the best games that anyone will ever play and you should be ashamed of yourself if you haven’t given this title a chance yet. Go buy it now.

Benj likes video games, neckties and scotch. His favorite games include Resident Evil 2 and Final Fantasy VIII. You may contact him at [email protected]
@ggburroughs
Previous Divinity #4 (Comics) Review
Next The latest Witcher 3 video shows off localization with The Wolven Storm