Tower of Guns doesn’t stop. From the moment you start, it barrages you with enemy fire, loot, upgrades, and more. It’s a speed-run friendly, fast-paced, chaotic first-person shooter with permadeath and randomized elements. 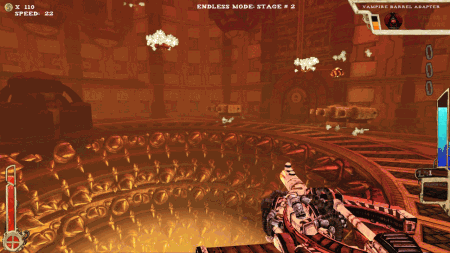 Tower of Guns concentrates all those element into a lunch break game. What sounds impossible was developed by Terrible Posture Games, who wanted to create a game that could be completed in one sitting. The random elements transform each run into a uniquely challenging playthrough. With negligible problems, Tower of Guns is frustratingly fun. This game knows what it is and goes full force towards it.

Tower of Guns doesn’t mess around. It’s a concentrated first-person shooter with randomized elements. A little bit bullet hell, a little bit roguelike, a little speed-run thrown in, Tower of Guns aims to be a quick, challenging, and fun single sitting experience and it succeeds. Your town has been invaded by a giant tower of guns and you don’t like that; so you go in to take it down from the inside. While there is a more detailed version of that story in the game, it ultimately doesn’t factor greatly into gameplay. Lack of story connection is not a problem though because Tower of Guns is all about the gameplay.

And it’s gameplay that’s quick and demanding. You have to move, shoot, gather loot, and repeat to keep pace. The hardest part of the fighting is first learning about the various enemies, but once you learn their limitations killing them becomes easy. Planning the best way to navigate the room to kill everything takes real skill however, and quickly becomes fundamental to success because if you die, you have to start all over. Yet, this run and gun style works so well because of the randomized upgrades and gun modifiers. 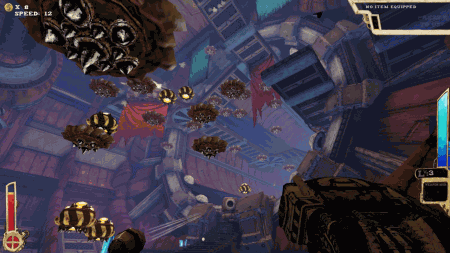 The randomized elements of the game embody the greatest aspects present. The power ups, gun modifiers, and items are fundamental to why this game is great. There are no limits to what gets dropped and the combinations can lead to some ridiculous fun. Imagine a shotgun that shoots rockets, yea that’s a possibility.

The level and areas also have random elements. There are a set amount of rooms, levels, and bosses, but the arrangement is different each run. The randomization updates Tower of Guns into a unique and ridiculous bullet-hell dungeon crawler.

And it’s also incredible expansive. There are tons of secrets hidden around the rooms that hold money, power-ups, or gun modifications. Secrets are everywhere and it’s not always possible to get them without a proper upgrade or power-up. The game also times each run, both the area and the total time. It was definitely designed for speed runs and the developer even promoted the game to Twitch streamers on it’s website. These additions keep things interesting even after twenty playthroughs.

While Tower of Guns is thoroughly enjoyable with unique and interesting elements, it certainly isn’t for everyone. The game does its genre brilliantly; however, it cannot be denied that this style may not appeal to a few. For fans of roguelike and bullet hell games, it is perfect, but the perma-death and quick gameplay may be frustrating for non-fans. Nonetheless, Tower of Guns is definitely worth attempting.

Actually, one of my few problems with the game is that it’s nearly impossible to read text. The game’s text box is very small and the font is difficult to read. With everything happening on the screen, reading the text shouldn’t be the hardest thing to do.

After a certain point, the text is really only story text, but in the beginning, many mechanics of the game get explained and it’s easy to miss. I wandered around a room for a while because I missed the text box that explained how to open doors.

Rendering would also sometimes get very choppy in rooms with lots of enemies. This wasn’t a consistent issue because it only happens when a large number of enemies along with lots of enemy fire are on screen, but it made moving quickly and accurately more difficult. Thankfully, it only marginally affected gameplay.

Tower of Guns concentrates several genres into a glorious first-person shooter bullet hell. The random elements compliment the game’s quick combat and help keep multiple playthroughs interesting. An impressive number of gun modifications along with upgrades and power ups prevents the game from being a repetitive slog.

Gameplay is king as the story takes a backseat due to lack of connection and hard to read text. Nonetheless, it doesn’t change how enjoyable Tower of Guns is and, even though it is a niche genre, it is worth trying.

Favorite Game: Shadow of the Colossus. Favorite Moment in gaming: 100% completing Legend of Zelda: Majora's Mask. Life isn't hard, Megaman is.
Previous Take a peek backstage with Guitar Hero Live’s new trailer
Next Get freaked out with The Evil Within again- The Consequence is available now 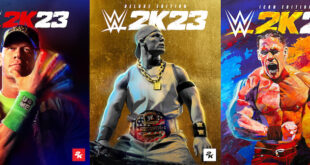