Part of Marvel’s new line of books taking place on Battleworld, Red Skull might just be the darkest tale in the whole event. 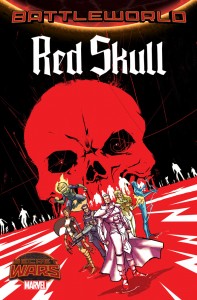 The Red Skull should be dead. Banished beyond the Shield long ago, if the zombies haven’t gotten to him, the Ultron robots or Annihilation bugs should have! Any yet word has reached the other side that he still lives, quietly amassing his forces, prepared to strike!

Now, a team of unlikely villains – Magneto, Winter Soldier, Lady Deathstrike, Electro, Moonstone and Jack O’Lantern will venture beyond safety to find the truth for themselves. Only problem – beyond the Shield, nobody ever comes back alive!

“I’ll be honest, this book is super dark,” promises writer Josh Williamson in an interview with Marvel.com. “It matches what you’d expect a book based around someone as horrible as the Red Skull. Prepare for a very twisted tale. If you’re a fan of my books you know I enjoy writing some pretty dark characters in some very messed up situations. Marvel has let me do that here as well.”

Awesome cover art aside, this is one to watch for. Red Skull has always been one of the premier villains of the Marvel U and this book is not only centering on him, but everything that’s dark and nasty about the mishmash that Secret Wars’ Battleworld represents (Ultrons, zombies, and bugs are all pretty gruesome really).

There’s also a genuinely interesting cast with disparate baddies that really haven’t worked together too much in the standard continuity. Magneto on the same squad with Winter Soldier (is he a villain again?) and Electro is pretty awesome to see, especially if you’re a longtime fan. And it’s kind of cool too that Skully is set to have such a huge influence on the proceedings. He’s one of the most classic baddies in the Universe after all.

Should be a fun one… in a way… and it’ll be brought to you in this three part series by Williamson and artist Luca Pizzari, kicking off this coming July.

Jason's been knee deep in videogames since he was but a lad. Cutting his teeth on the pixely glory that was the Atari 2600, he's been hack'n'slashing and shoot'em'uping ever since. Mainly an FPS and action guy, Jason enjoys the occasional well crafted title from every genre.
@jason_tas
Previous There’s finally a trailer for the new Bond film. Watch it.
Next LET’S TALK ABOUT SAILOR JUPITER: AN INTERVIEW WITH VOICE ACTRESS SUSAN ROMAN