It’s a changing of the guard on the still relatively new Star Wars series from Marvel Comics. 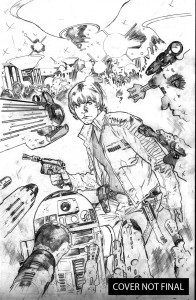 Though the writer will stay Jason Aaron (who’s been doing a spectacular job by the way), John Cassaday is officially out as penciler. Cassaday released a short statement yesterday saying that he would be leaving the book as of issue #6, which left us with a lot of questions. And although most of those still are unanswered, we do now know who’ll be replacing him as illustrator.

Stuart Immonen will com aboard from All-New Captain America, and will start on the flagship Star Wars title as of issue #8. Immonen is a pretty great artist in his own right and has worked on a bunch of books from both Marvel and DC Comics in the past. His style is a bit similar to the outgoing Cassaday and he should be a good fit for the Galaxy Far, Far Away. You can get an early glimpse of his proposed cover for Star Wars #8 with the image to the right.

As for the mysterious gap left with issue #7, with which there’s currently no artist attached, we have no idea really. Marvel hasn’t made any announcement as of yet, though we’ll let you know as soon as they do.

Jason's been knee deep in videogames since he was but a lad. Cutting his teeth on the pixely glory that was the Atari 2600, he's been hack'n'slashing and shoot'em'uping ever since. Mainly an FPS and action guy, Jason enjoys the occasional well crafted title from every genre.
@jason_tas
Previous The Celts are coming in Total War: Attila
Next Episode 2 of Tales from the Borderlands is now available