A monthly Plants vs Zombies comic series is on the way from Dark Horse Comics. 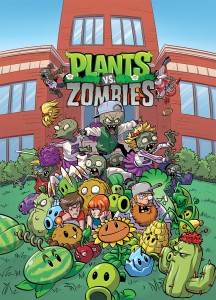 The little property that just keeps on ticking, PvZ is just about everywhere these days and still seems to be picking up steam, which is really incredible when you think about it. Not only did the game start life on mobile handsets, but it also was essentially a tower defense title, which isn’t a genre that’s really known for producing blockbuster entertainment properties. That’s kind of what Plants vs Zombies has become though.

Entering the world of games, books, graphic novels, toys, and now comics books, PvZ is a juggernaut. This new series follows Dark Horse’s The Art of Plants vs. Zombies, which launched in 2014, and was dressed as not just an art book, but also as a kind of zombie manifesto. Several PvZ mini-series’ have already been hits for the publisher as well, with the property in total selling in the neighborhood of 500k copies as of last Fall. So that’s pretty big time right there.

Jason's been knee deep in videogames since he was but a lad. Cutting his teeth on the pixely glory that was the Atari 2600, he's been hack'n'slashing and shoot'em'uping ever since. Mainly an FPS and action guy, Jason enjoys the occasional well crafted title from every genre.
@jason_tas
Previous LEGO Jurassic World trailer debuts as Warner Bros talks LEGO toys-to-life
Next Battlefield Hardline plays cops and robbers starting today