Issue #2 of one of the very best book on the shelves, Divinity’s weird story of a man-turned-god continues this week. 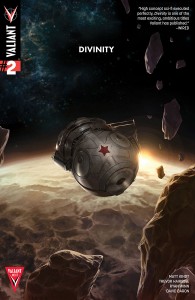 A Soviet cosmonaut – seemingly imbued with the powers of a god – has taken up residence in the Australian Outback. Some think him to be a savior…while others believe he will usher in a new Communist Age…

Now the rest of the world’s powers must decide for themselves – will the enigmatic DIVINITY offer his hand in friendship or will Earth’s heroes find themselves helpless against the wrath of the divine?

In the first issue, this new god made his presence felt on Earth by displaying some… interesting abilities and powers, that are so far beyond anything else that we’ve seen in the Valiant U. It actually almost felt like I was reading something from another publisher, or even a one-shot that wasn’t connected to anything. When you think about that, and the fact that we’re talking about a superhero universe that has characters like X-O Manowar and the psiots, then you can get a sense of just how powerful this newcomer is.

Will this new divine force face off against the likes of those heroes and villains? Or is he headed for a fate that’s all together different?

A limited series, Divinity will have a run of just four issues, so you might want to catch this excellent tale of a living god from Matt Kindt and Trevor Hairsine while you can. Issue #2 hits the stands on March 18th.

Jason's been knee deep in videogames since he was but a lad. Cutting his teeth on the pixely glory that was the Atari 2600, he's been hack'n'slashing and shoot'em'uping ever since. Mainly an FPS and action guy, Jason enjoys the occasional well crafted title from every genre.
@jason_tas
Previous Mortal Kombat X goes to Camp Crystal Lake as Jason joins the cast
Next Eugen Systems’ newest RTS harkens back to the golden age of the genre