Every Ghost Rider you can think of (and more than a few that you can’t) will be starring in Marvel Comics’ latest Battleworld book, Ghost Racers. 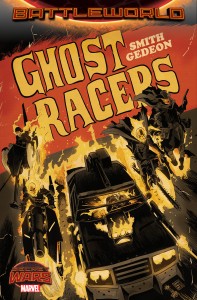 “This is the book that every GHOST RIDER fan is going to dig,” says Senior Editor Mark Paniccia. “We’re not losing the heart and soul of the concept—the human drama of holding the demons at bay—especially with Robbie Reyes, but by God we’re leaning into the vehicle design, speed and hellfire of it all. It’s visual dynamite.”

“The designs from Juan Gedeon are incredible,” continued Paniccia. “The Riders are recognizable but we’ve pushed them to the extreme and that’s what’s getting everyone around the office, the creators working on this—and the few people who’ve seen sneak peeks—so excited. These are such wicked twists on Johnny, Danny, Alejandra and more you’ll lose your @%$#. You’ve never seen GHOST RIDERS like this before!”

As a big fan of the Dan Ketch version of Ghosty, I have to say I’m pretty happy to see this book. Ghost Racers incorporates very version of Ghost Rider that has appeared in the Marvel U, and from around the multiverse as well.

The Spirits of Vengeance find themselves in a pretty unusual position in this new Secret Wars monthly though. “Enslaved” and trapped in the race arena, the Ghost Riders must race each other, without allies and as rivals. The prize is temporary freedom, and Marvel hints that the losers will have a decidedly more… unlucky fate.

Find out what that fate might be when Ghost Racers #1 arrives from the team of Felipe Smith and Juan Gedeon this May.

Jason's been knee deep in videogames since he was but a lad. Cutting his teeth on the pixely glory that was the Atari 2600, he's been hack'n'slashing and shoot'em'uping ever since. Mainly an FPS and action guy, Jason enjoys the occasional well crafted title from every genre.
@jason_tas
Previous Toy Fair 2015: Square Enix shows off DC and new Marvel figures
Next Happy Birthday to the PS Vita!