Club Nintendo has officially been shuttered… or, it will be anyway. Not to worry though, the company already has something else on the drawing boards. 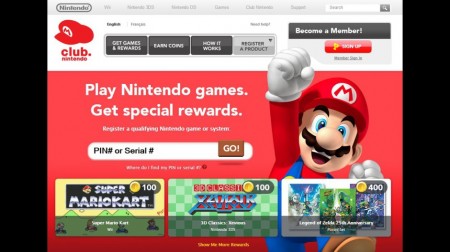 “We thank all Club Nintendo members for their dedication to Nintendo games and their ongoing love for our systems and characters,” said Scott Moffitt, Nintendo of America’s executive vice president of Sales & Marketing. “We want to make this time of transition as easy as possible for our loyal Club Nintendo members, so we are going to add dozens of new rewards and downloadable games to help members clear out their Coin balances.”

For those who used Club Nintendo, this isn’t the greatest of news, though there is something of a silver lining as there’s some free stuff to be had, and a new program on the horizon. Club Nintendo was a membership club, for those among the uninitiated, which offered all sorts of little goodies and doodads of both the physical and digital kind. Users would register games (via include codes) and hardware, as well as complete surveys, in order to get coins. After they got ’em, those coins could be used to nab the ‘gifts’.

The Club spun out of previous efforts by the company to establish a loyalty program and was opened officially in 2007 here in the US. As of right now, while the US arm is closed for maintenance, the club is still in operation and will be till the end of March. After that time, you won’t be able to register anything new, though you’ll still be able to redeem coins till the close of this June.

And if you don’t see anything on there that speaks to you at the moment, then you might want to hold out till next month. To close out the shop, Nintendo will be adding a bunch more items in February, so there’ll be a better selection than what you see currently.

You’ll also be able to nab a free piece of software for your Nintendo 3DS. Flipnote Studio 3D, a sort-of cartoon making program, will be free to all Club members through June 30th. You can even get in on this if you aren’t a Club member currently as anyone who signs up between now and the end of March will be eligible for the free copy.

As for that follow-up I mentioned, there’s no word on just what it might be, or when we could expect to hear something about it. Nintendo is simply saying that they’ll be chatting about a new loyalty program at “a later date”.

Jason's been knee deep in videogames since he was but a lad. Cutting his teeth on the pixely glory that was the Atari 2600, he's been hack'n'slashing and shoot'em'uping ever since. Mainly an FPS and action guy, Jason enjoys the occasional well crafted title from every genre.
@jason_tas
Previous Dragon Age crashes Raptr’s charts in December
Next Firaxis announces a journey to the final frontier with Sid Meier’s Starships