Go back in time with classic MacVenture games from Zojoi

The developer responsible for the rebirth of Shadowgate has the rest of the original MacVenture games ready for re-launch. 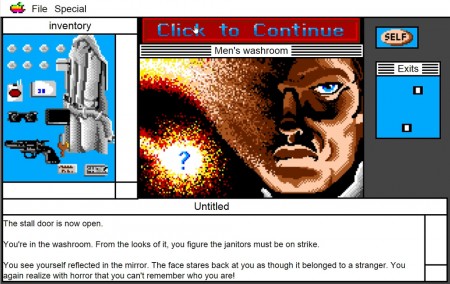 Before you get too excited, these four games aren’t remakes like Shadowgate was, they’re actually just re-releases. Still though, that’s cause for some happiness alone for a whole bunch of gamers who remember playing these graphic adventures from the early days of the Mac (and the genre really), as they’re not the easiest games to find… well, pretty much anywhere,

Till now anyway, you’d have been hard-pressed to locate a copy of Déjà Vu, Déjà Vu II, the original Shadowgate, or Uninvited, that’d run on anything remotely close to a modern day machine. Enter the MacVenture series, a set of games that Zojoi says fans have been clamoring for since Shadowgate hit PC’s last year.

“Fans of the new re-imagined Shadowgate have been clamoring for more story-based adventures in the style and themes of the original MacVenture games,” said Dave Marsh, Founder of Zojoi. “So while we were developing our new projects, we did a face palm. Why not make these memorable classics available to them now and take a look into other platforms as well? It was a blast to see how awesome the titles have held up!”

The four games will be released as a part of a bundle pack or separately, so you can buy them however you see fit, and all will be available later this month (January) for both he PC and Mac (natch). Each game will include both the original Mac 128k black and white, and the Apple IIGS 4-bit color versions as well, so you get your nostalgic fix however you like. No word on pricing, but we’ll let you know as soon as we do. Here’s a detailed description of what’s in the virtual box for the games in question:

Jason's been knee deep in videogames since he was but a lad. Cutting his teeth on the pixely glory that was the Atari 2600, he's been hack'n'slashing and shoot'em'uping ever since. Mainly an FPS and action guy, Jason enjoys the occasional well crafted title from every genre.
@jason_tas
Previous Sid Meier’s Civilization: Beyond Earth is Free on Steam This Weekend
Next Toy Fair 2015: Dark Horse to unveil new Game of Thrones Daenerys statue