I’ll start off with the meat and potatoes of the game, aka the gameplay itself. As mentioned above, you start with a basic space station, which you can increase in size by either connecting “space junk” to it or ordering more command bridges (i.e. separate ships) from Earth. There are random NPC ships that will try to attack your main HQ, which you must defend against, at all costs. My starting strategy was to turn the HQ into a mega weapons platform, with many weapons, different weapon types, and thrusters/engines. It turned out to be quite lethal, but also very slow.

As your ship gets larger and acquires more parts/mass, it requires a significant amount of thrust to move around. So then I built a couple of small fighter-style ships, with only a couple engines and a few weapons, for greater maneuverability. I also made a ‘resource’ focused station to collect the game’s 3 resources: metal alloys, electricity, and fuel. The resources accumulate very quickly, so after you have a resource station set up, you don’t really have to pay much attention to them.

Different pieces of space junk give you different resource boosts too. The game procedurally generates, so you’ll never run out of space junk either, which is nice. There are many types of junk; from warheads (which can be used as thrusters or as weapons), army tanks, and retired satellites, to rubber duckies, taco trucks, burger joints, and turtle cats (which look exactly like what you’d expect a turtle cat to look like). This adds a lot of humour to the game. 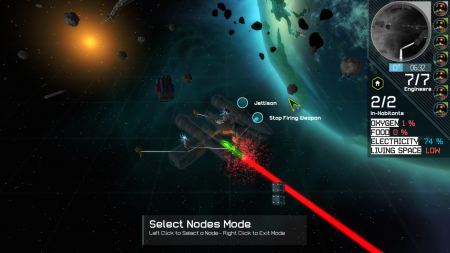 To build your ships, you command a crew of engineers to gather the space junk for you and attach it to your command bridges. When they are pulling/moving an object for you, they can move through other objects without problem. However, if they drop an object inside one of your ships, it’ll burst apart. This has happened to me a few times by changing their action without realizing they were in the middle of passing through a station. Also, after playing this game for a while, I found the engineers voices started to grind on my nerves. They have a few choice phases, that they like to repeat incessantly, while doing their work. “Repairing damaged node” is one of their favourites, becoming one of the most annoying phrases in the game. Listening to 20-30 engineers working and chattering away had me almost tempted to completely mute the audio, or at least the sound effects. The music isn’t bad, but it’s not great. It’s nothing special, but does give a ‘spacey’ vibe.

General movement in this game is also frustrating. The items that provide thrust do not list how much thrust they provide, so there is no way to compare them. This makes it difficult to balance thrusters on your ship so that it doesn’t fly crooked. Then once you have it moving, sometimes a piece just snaps off. I’m not entirely sure why this happens, but I would guess that it has something to do with the strength of the supports vs the amount of thrust. Although there is nothing in-game about this, that I’ve seen, so I’m going to stick with this hypothesis. Movement is also greatly hindered by the fact that space is extremely cluttered with junk. I would really like to see the amount of junk halved or more, just to allow for easier exploration and movement.

The game does provide you with missions that can be completed to gain XP and increase your player level as well – but all that seems to do is increase your HQ’s XP, so I’m not sure what the ultimate goal is. I also found that the missions get repetitive. I’m not sure if this is because the game is only in early access and more is to be added, but they seem to be the same thing, over and over again. It’s either add a specific item to a habitat, or destroy the incoming NPCs. The NPC ships only ever go after your Habitat HQ, meaning you really don’t have to defend any resource-based stations that you have, even if the NPCs move passed them (unless you attack first).

One last annoyance for me is that the aiming of weapons is, in my opinion, ridiculously implemented. When you hit ‘Enter’, it pauses the game and displays your station(s). You then click on a weapon, manually change its firing direction by trying to estimate the appropriate firing angle, then hit ‘Enter’ to return to the game. You might want to grab your protractor for this portion of the game. Fire, rinse and repeat! Overall, my recommendation is save this game, a lot! Having to rebuild mega stations over and over really ruins the fun.

On the plus side, this game does employ some physics. You can ram things to do damage, and if you’re firing weapons that recoil, you will move you in the opposite direction of the projectile. The movement can be very clunky at first, but once you’re used to how the engines work, it does become easier.

There is also workshop support, so you can design and add your own elements to the game, as well as download other people’s uploaded content (junk). No, I’m not being mean – that’s what the game actually calls it in the menu!

Although Habitat is fun for a building/combat/sandbox set in space, I have found myself swearing at it more often than having fun. Unfortunately, the at-first addictive gameplay and humourous and creative space junk, cannot make up for the gameplay annoyances and flaws. Therefore, I would probably give this game a 4/10 if I was actually reviewing this preview copy.

It’s a far cry from perfect, but then again, it’s by no means awful. If this game goes on sale, or you have $16.99 CAD to spare, it does offer enough to keep you entertained for a while – and hopefully, as a work-in-progress, some of the more annoying flaws will be ironed out before the full retail release. Repairing damaged node, indeed!

I am an avid gamer residing in Ontario, Canada. I play games from almost all genres, but my favourites are Strategy games and RPG's. Hobbys I have other than gaming are playing bass, reading, and building/upgrading computers.
Previous Marrying Mr Darcy- The Pride and Prejudice Board Game: interview with Erika Svanoe
Next ComiXology opens the gates on massive Black Friday sales