DK produces a knockout of a book celebrating 75 years of one of comics’ greatest superheroes. 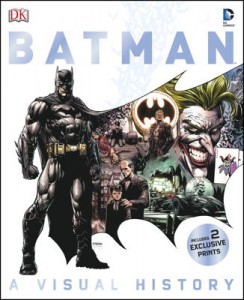 One of the marquee publishers for large-scale tomes on comic book and pop culture characters, DK has been making titles not to be missed by comic fans for years. The company has made it a habit to put out brightly colored, information-filled books based on some of the biggest heroes of all time; characters like Spider-Man, Wonder Woman, Conan the Barbarian, the Avengers, Superman, and of course, Batman.

While the above mentioned books (and there are plenty more by the way) all focus on their individual title characters though, they’ve all got nothing on Batman: A Visual History. I’m not knocking them either, it’s just that this one goes deeper into the material and has a focus on not so much the fictional characters, but the events of the various comic series, which makes a difference. The Batman has been around for a long, long time after all, and has amassed one of the most impressive and complex histories in the comic book medium.

Running through all of it is no easy task, but writer Matthew K. Manning does an incredible job of it here. Going from his creation by Bill Finger and Bob Kane 1930’s, right up to the latest incarnation from writer Scott Snyder and artist Greg Capullo that continues to lay beatings on the criminals of today’s DC Universe, the Dark Knight has been a mainstay in the comics world and this book covers all of his most important moments.

Fortunately, Batman: A Visual History is all about detail. An impressive, heavy-stock dust jacket covers the volume and is splashed with an original Jason Fabok illustration depicting a condensed, pictorial life story of Batman. His ‘birth’ at the moment of his parents’ murder, rogues gallery, connections with characters like GCPD Commissioner Gordon and Catwoman, his trip through time at the hands of Darkseid, and rebirth in the New 52 are all etched into this very impressive work from Fabok, shaded by colorist Tomeu Morey.

Remove the book, crack the cover, and you’ll find a print of that same piece of artwork along with a black & white by Fabok of the man himself. Both works are worth hanging in your own Batcave, but if you don’t want to break up the edition, there’s a neat little slide-pocket where they’re stored right in the interior cover itself.

Past that, you’ll be treated to a forward by famed writer Frank Miller, the man who helped reinvent the character, as he describes how he himself tried and failed to kill Batman twice (really), as well as an intro by Manning. And then… well, then you’re into the year by year history of Batman and it doesn’t let up until you reach the back cover. Starting in the 1930’s and ending in the New 52 Universe of today’s DC Comics, this is as in-depth a history of pretty much any character that you’re likely to find anywhere. The fact that it’s Batman just means that there’s an even bigger impact to this particular fictional-history lesson.

The book is laid out in an impressive fashion as well, and has a breakdown of story and era, by the year and even the month. Taking the 1980s as an example, my personal favorite decade for Batman starts off with a fantastic splash image featuring the death of Joe Chill storyline (the man who murdered the Waynes) and then goes through the years following. It’s a decade that shook off the rest of the goofy feel of the 60s version of the character and cemented the dark tone of Batman, a change which would prove to be a lasting one.

Each section has a series of spotlighted issues from the comic that feature some of the more important books of that specific year. In 1984 we see the rise of Jason Todd as the second Robin, a focus on Batman’s ‘new’ team The Outsiders, and the birth of a fresh Teen Titans group, with Robin temporarily retiring, which is a move that eventually led to his transformation into Nightwing. In addition, Manning then adds in ‘Special Features’, like a note on the introduction of Outsiders member Geo-Force’s future wife Denise. Yep, this book gets that in-depth- there are actual highlighted notes relating to Geo-Force.

Then there’s the ‘Also This Year’ section, which runs down an even further catalog of things that happened in and around Batman’s life in the particular year in question. For 1984, the Earth-Two title Infinity Inc. debuted, Super Powers #1 launched (based on the toy line!), Huntress guest starred in Wonder Woman, Batman faced off against Man-Bat in a special presentation, and the World’s Finest met new hero Sonik (who was not a hedgehog).

It might sound like there’s too much going on in Batman: A Visual History with all that, but that’s far from the truth. Manning does an awesome job collecting what’s important for the reader to know and assembling it all in easy to read, quick shots of info that run along with the covers of these classic books. None of these descriptions are more than a paragraph in length, but they all get across what should be noted. It’s a masterful job, as more often than not, it’s not all that easy to get what you want to say on paper in just a few words.

And all of this, but the way, is framed by some of the best art you’re likely to see anywhere, thanks to the massive scope of the book itself. You’ve got stuff ranging as far back as the very first issue of Detective Comics with Batman, so the images here are from the top artists in every era of the art form. And man are some of them blasts from the past. Especially if you’re a long-time fan, or someone who’s collected a plethora of back-issues, this stuff is nostalgic gold.

I hadn’t realized just how manny of the stories from the 1990s were favorites of mine either. It’s a decade that’s probably best known for gimmick covers and the breaking of Batman’s back at the hands of Bane, but there was also Tim Drake as the third Robin, the Underworld Unleashed and No Man’s Land storylines, The Long Halloween (one of the greatest Batman tales of all time), JLA #1, Kingdom Come, and one very special Christmas story for fans of the excellent Animated Series that was running at the time.

Thumbing through this volume is loaded with moments just like the ones that I mentioned above, too many to count really. It’s a testament to the character, and kudos to Manning for getting everything all in one place and making it all so accessible.

Batman fans should flat-out not miss this book. I can’t really put it too much clearer than that.

Even if you’re a Dark Knight devotee and have a library full of books on him, this one’s still a necessary addition as it does more than any other I’ve read on Batman to fully flesh out his history and corner of the DCU. It’s also one of the best books on a superhero period, so even if you’re not the biggest of Batman fans, it’s still worth at least a look. Running over 340 pages too, this is more than an afternoon’s worth of reading and will more than likely be a volume that you’ll page through for a good long time.

I’ve only just gotten this copy for review and I’ve already opened it up more times than most graphic novels I’ve got in my library. Bottom line, Batman: A Visual History is an in-depth, detailed look at Batman’s legacy up to the present day, and a just plain fun book to read… over and over again.

Jason's been knee deep in videogames since he was but a lad. Cutting his teeth on the pixely glory that was the Atari 2600, he's been hack'n'slashing and shoot'em'uping ever since. Mainly an FPS and action guy, Jason enjoys the occasional well crafted title from every genre.
@jason_tas
Previous Dark Horse Comics loads up with Mega-Bundles for Black Friday sale
Next Dungeons & Dragons Monster Manual (Book) Review