Assassinating on the seas once again. 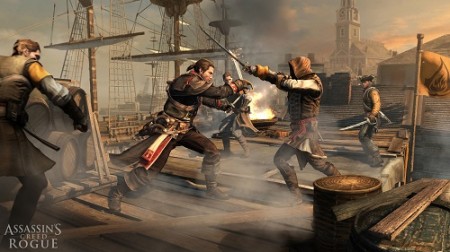 With the attention that Assassin’s Creed Unity has been receiving, it feels as if Rogue went under the radar due it being aimed at people who don’t currently have a next gen console, which is a shame due to the fact that it is probably one of the more solid games in the franchise much like Black Flag was.

You play as Shay MaCormack, a character who seems to be a laid back, easy going Irish man at first (much like Edward Kenway did) but he also shows a great loyalty to friends and to the Creed.  But he is always the first to question the motives of his Brotherhood and their leader.  A turn of events leads Shay to believe that the only way to bring peace to the world would be to stop the Assassin’s plans. After figuring out what the leader has in store for the brotherhood, he turns on them and decides that the Templars have the right plans for the future of the world.

The game has a huge open world to explore, with plenty of things to do, but for all this I can’t help but feel that game is empty, lacking in new ideas. Although they look stunning and the ice environments add to the sea fairing side of the game (it’s always fun to bump into penguins), the areas can be tedious and just time consuming. 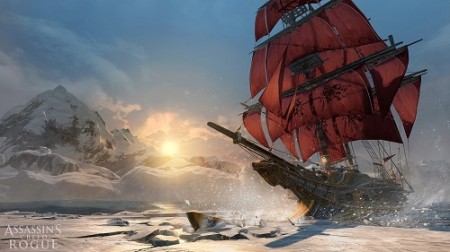 A lot of the missions are too similar to each other.  All ‘fight on the sea, follow them to land, stab’ which gets very repetitive.  Considering that the main character takes a different path than any before him, you would have thought Ubisoft might have at least tried some different gameplay styles rather than going ‘do all the stuff you used to do, but as a Templar instead!’

They have taken small elements of other games such as renovations and put them into this, which is nice, but due to the amount of gold you receive whilst playing I had enough money to help Shay retire and forget about both sides of the war.  In fact he probably could have bought most of New York considering the amount he saved.

This leads me to the new weapon, probably the most fun of any weapon from the series but also the most useless in terms of stealth, the grenade launcher.  This is not a typo – our stealth hero carries a grenade launcher around which can put people to sleep, turn them into berserkers or blow them up.  Clearly I am not a trained assassin, but I would have thought that high impact projectiles would not be the weapon of choice when trying to infiltrate a highly secured area.  On the plus side it is a lot of fun to use and has its uses.

The Sea battles are still fun, but the only reason to upgrade the ship fully would be to fight the legendary ships.  I managed to finish the actual story of the game with minimal upgrades and without major issues.   Sadly though, the shanties have lost their charm. I loved them in Black Flag but hearing the same ones in this game made me mute them and put on Rob Cantor’s ‘Shia Labeouf’, which made for a much funnier shanty. 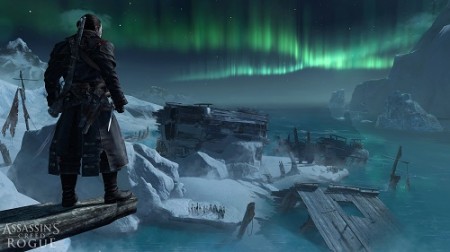 Ubisoft has made it so that you can be boarded, which was interesting at first but after a while it can get a bit irritating.  The clue to whether or not your opponent will do this is that they will seem to be running away, then turn around and prepare to ram you.

Of course, with any Assassin’s creed game there are modern day sections, Ubisoft has once again gone with a faceless, nameless hero for you to play as in the modern world, possibly because they have no idea where to take these segments now that Desmond is no longer around.  We are back in Abstergo Entertainment – or possibly Google looking at the logo colour choices – in which Nameless McFace has managed to cause a meltdown by trying to assess shays memories, which then introduces probably the most annoying character in the whole of the franchise; Violet De Costa. She doesn’t seem to be able to finish a sentence without using the word ’numbskull’, even when you manage to do things that she couldn’t dream of. I think the writer thinks that the player would find it funny, but not in every sentence.

The modern day sections really let the game down and have let the series down since the death of Desmond.  When he was around it felt like you were building to a modern day Assassin’s Creed game, which would have been a good move in my opinion as it felt that the series needed that after Connor.  Instead we have these sections which just feel like they are filler.  No matter how many nice little secrets you can find, if anything it seems like they have been put in to remind the player that it’s all in the Animus.

The A.I in the game has still not been fixed. The sea battles suffer from what I will call the ‘Dynasty Warriors Effect’ in which both sides of the battle will stand around looking at each other, occasionally throwing a stab at each other whilst you run past wildly taking out anyone who looks at you funny.  Also, on several stealth missions I would free run, randomly jump out of a tree and land in front of the guards. You would think this would mean a battle but half the time they would say “Come back here!” and I would fall into a bush in front of them, and they would suddenly act as if I had never even existed. 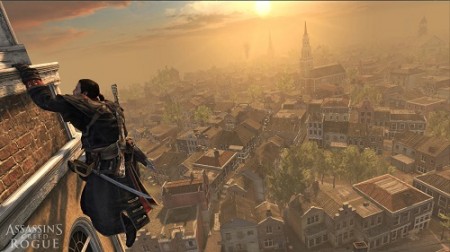 An interesting bug that happened late on into the game was the disappearance of a character mid mission.  The character model vanished without a trace, which lead to an inadvertently hilarious cut scene in which Shay looked as if he was talking to the voice in his head, whilst the crew cheered him on.

Shay is an interesting character.  As much as he seems to agree with either order he is aligned with, I get the sense that the character has an uneasy feel about the whole situation between Assassin’s and Templars, he really only wishes for innocent people not to be harmed.

Ubsioft seem to have created a game to confuse long time fans.  It makes out for a lot of the game that the Templars are misunderstood and that the player has had rose tinted glasses on the whole time due to the fact that every game has been from the view point of the assassins.  However, every so often there will be an event or conversation that then reminds you that, no matter what Shay’s intentions are, the Templars are still cold blooded.  I personally think that this is the biggest misstep of the game and the series as a whole, it tries too hard to justify everyone’s actions by making each side seem like it’s in the right, which in the end makes them both look like they are in the wrong.

FINAL THOUGHTS
Somewhere within this there is a very good game about being a Templar, but it fell short.  Very short.  It has an overall rushed feel about it and is really Black Flag 1.5.  The sad part is that Shay is probably one of my favourite characters of the series, but it seems that he just wasn’t enough to carry a game which sometimes feels like elongated DLC.

If you are a diehard fan I still say buy the game.  If you are, like myself, you will enjoy finding the files that Abstergo keep in the modern day world. And it still feels like you are pirate even if there are none about.

Mike is Brutal Gamer's Indie Editor. He has been playing video games since the early 90s and is fond of racing games, puzzlers and MMOs. Typing /played while in WoW makes him cry, but not enough to stop him playing some more.
@Ognawk
Previous Titanfall Deluxe Edition announced
Next The Guardians of the Galaxy team-up with the entire Marvel U in 2015