The Hellboy universe expands once again as creator Mike Mignola takes the character back to his first ever mission with a young B.P.R.D. 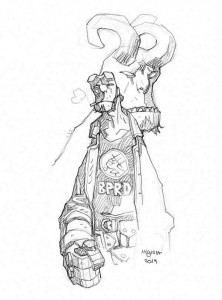 It’s kind of a stretch for me, but Hellboy is 20 years old this year. Not the character himself mind you, I’m talking about the line of books that spun out of a single series of miniseries’ two decades ago. And that single set of books has truly spawned a universe of all things Mike Mignola, with comics focused on the main devil himself, the B.P.R.D. as a group (one of the very best books on the racks today by the way), Abe Sapien, and more. It’s been a wild ride and it’s about to get even wilder.

Hellboy and the B.P.R.D. goes back to the very start of Hellboy’s field operations, way before the Hell on Earth events erupted, and way before he lost his way and got sick of playing supernatural cop. The book starts off in 1952 with the story written by Mignola himself as well as John Arcudi, and pencils form the very talented Alex Maleev, who’s work you’ve probably seen in a whole mess of things including Mighty Avengers.

Jason's been knee deep in videogames since he was but a lad. Cutting his teeth on the pixely glory that was the Atari 2600, he's been hack'n'slashing and shoot'em'uping ever since. Mainly an FPS and action guy, Jason enjoys the occasional well crafted title from every genre.
@jason_tas
Previous GTAV music collection coming to CD and vinyl
Next This War of Mine launches this month, looks amazing