Home / News / past / The Vanishing of Ethan Carter (PC) Review

The Vanishing of Ethan Carter is a rare kind of game. One that only comes by once in a great while, but when it does, it’s a masterpiece.

The Vanishing begins with the main character, Paul Prospero, talking about a letter he’d received from a boy named Ethan Carter. Strange things are afoot in Ethan’s small home village of Red Creek Valley and it’s up to you to figure out what they are and why they’re happening. The first actual part of the game you are given a warning that it will not hold your hand, no help will be offered to you, and you must figure everything out on your own… and it holds true to that statement throughout.

While walking through a small forested area, the tenseness kicks in as the music (which is flawless by the way) plays haunting melodies and traps spring from seemingly every which direction. I will be completely honest in saying that, during this section of the game, I found myself jumping at every movement. I was unsure exactly what was going on, so I was waiting for something to jump out and grab me (which does happen at one point later on in the game).

The main mechanic for most of the puzzles is finding every bit of evidence pertained to one of the games many scenes of murder. Once you find every piece (which is more often than not, pretty difficult to do), then you will be taken to a spirit world type dimension and told to click the events in which order they took place. This detective work is not easy by any stretch, but it is rewarding once they are finished.

Although it’s got some pretty cool stuff to do though, The Vanishing is actually surprisingly short and it only took me around three or four hours to complete. That being said, just because it’s short doesn’t make it any less amazing. The Vanishing is what I would consider perfect length for an interactive story. Any longer and it could have gotten boring and repetitive.

Oh and it’s gorgeous, by the way. Many photo-worthy scenic views showed up during my time in Red Creek Valley. To be honest, on more than one occasion I just stopped and took in the absolute beauty of the area. It’s actually very interesting now that I think about it, you can almost feel the eery darkness creeping in the back of your mind; the beauty of Red Creek Valley doesn’t prevent grisly, disturbing murders taking place.

However, the beauty and vastness of the landscape does come with a price. I have a monster of a computer, and I still experienced some laggy areas. On a few occasions there were multiple frame skips. It wasn’t anything game breaking for me, but I just thought I should issue a warning here.

Other than the occasional drop in framerate, I consider The Vanishing of Ethan Carter to be a flawless work of art.

Sure some of the puzzles are difficult and occasionally unfair-feeling, but the storytelling is done through each of these in a great way, leading you to suspect a great many different possible endings, before slapping you across the face with the cold truth in the climactic moments. The Vanishing of Ethan Carter is a definite must play, and you’re really missing out if you skip it because of its short length.

Tags PC Reviews The Astronauts The Vanishing of Ethan Carter

Five parts actual review, 2 parts sarcasm, 2 parts bad puns, and one part self loathing = one of my game reviews.
Previous BEHIND THE CREATION OF GANG UP! ROBIN KEIJZER
Next Experience the world and immersion of Assassin’s Creed Unity 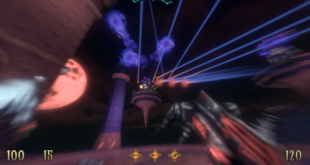