The ‘superior’ label doesn’t just apply to Spider-Man anymore as Tony Stark gets (even more) smug and way more futuristic in Superior Iron Man #1, but is this an Iron Man that everyone in the Marvel U can get behind? 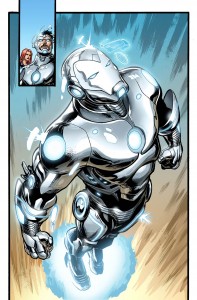 Today Marvel is proud to present your first look inside SUPERIOR IRON MAN #1, the brand new ongoing series launching as part of Avengers NOW! The new creative team of critically acclaimed writer Tom Taylor (Earth 2, Injustice: Gods Among Us) and fan-favorite artist Yıldıray Çınar (Supergirl) make their Marvel debuts for a Tony Stark like you’ve never seen him before!

“This is a Tony we haven’t seen since before that fateful heart injury that turned him into one of Earth’s Mightiest Heroes,” says Senior Editor Mark Paniccia. “The smug, over-confident quintessential capitalist is back…and readers are going to get a real kick out of it. Even the most loyal IRON MAN fans will find this a guilty pleasure.”

Spinning directly out of the events of the blockbuster Avengers & X-Men: AXIS, the Tony Stark of old is back! More stylish, more confident, more cunning and more ruthless than ever before. And he’s ready to lead the world into the future – starting with San Francisco! How far would you go for beauty? Power? Immortality? Tony Stark will give it to you, for a terrible cost. Extremis 3.0 has been unleashed upon San Francisco, transforming the City by the Bay into a gleaming metropolis with the “perfect” society.

Only not all is golden this side of the Golden Gate. Daredevil isn’t down with Stark’s new vision of the future, and he’s going to stop at nothing to end this new threat to the city he calls home.

“Tony Stark’s idea of Utopia isn’t everyone’s idea of perfection,” says writer Tom Taylor in an interview with Marvel.com. “…and even a blind man can see the cracks in Tony’s Brave New World.”

He’ll make you better. He’ll take away the pain. He’ll make you…SUPERIOR! And he’ll stop at nothing to do it. But just how far will he go? Will he save the world, or pull it apart at the seams? Good or bad, it doesn’t matter – he’s superior. And he’s coming to comic shops in November for SUPERIOR IRON MAN #1!

For more on Superior Iron Man & Avengers NOW!, please visit www.marvel.com. Join the conversation on Twitter with hashtag #AvengersNOW and don’t forget to follow us at @Marvel [www.twitter.com/Marvel]!

To me, it almost feels like Marvel has been trying to make Tony a villain of sorts for some time now. I haven’t ever been the biggest fan of the character really, but I do know he’s been one of the core heroes of the Avengers since the beginning and is arguably the focus of the Marvel Cinematic Universe. With that in mind, it definitely feels strange that he’d be cast in anything but a favorable light, especially now with the rampant popularity of those movies.

Spinning out of Axis though, Marvel’s latest big event book, Iron Man has become a sort of ‘hard-edged face’ to borrow a wrestling term. He’s still a superhero, he’s still an Avenger, but he’s way more of the self-indulgent man that he was (as the press release above says) before he wore the metallic armor that we all know and love. And that’s kind of a strange turn for him as well, since that aspect of the character (being a man who’s ‘seen the light’ as it were) was a fundamental aspect of what made the character for so many years.

Interesting times at Marvel with the trio of shakeups for its three main Avengers heroes. Heading into this coming Summer’s selection of crossover revisits (and who knows what else is coming), Iron Man’s transformation just might prove to be the biggest and most impactful one of all.

Jason's been knee deep in videogames since he was but a lad. Cutting his teeth on the pixely glory that was the Atari 2600, he's been hack'n'slashing and shoot'em'uping ever since. Mainly an FPS and action guy, Jason enjoys the occasional well crafted title from every genre.
@jason_tas
Previous Super Smash Bros Nintendo Direct on the way this week
Next Halo: The Master Chief Collection to have day one, 20GB content DLC