Combine the cheesiest B-Movie dialogue and forced humor, and bundle that together in a rail shooter release and what do you get? You get Viktor Kalvachev’s Blue Estate. 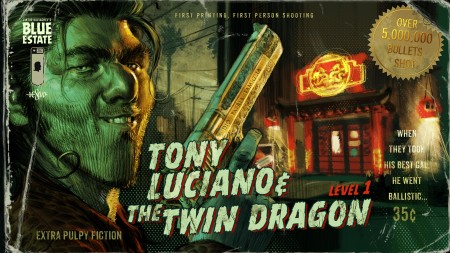 The game is reminiscent of old-school rail shooters such as Time Crisis and House of the Dead, but only slower and more repetitive. Blue Estate’s AI reminded me of targets that you can find in a shooting range in that they will stand in front of you and wait for you to kill them. To make a good shooter, a challenging AI with different patterns of attack is needed, but Blue Estate fails to deliver on that end. The game could also use more guns or at the very least enable the player to choose what gun he would like to use for each stage, the lack of a choice and variation in weaponry is disappointing.

The characters are varied and colorful, but they try too hard to be noticed, something that’s unnecessary with better writing. Tony Luciano is the main character of the game, and he is described as the son of a Mafia Boss who owns a strip club. He’s cocky, rude, and succumbs to bouts of violence from time to time. Narrating the story is Roy Devine Jr., a private-eye who “never sleeps (and rarely bathes)”. His narration is geeky, flabbergasted and at times unneeded though it has its upsides every now and then when it is actually funny or charming. Then finally, we have Cherry Popz. She is an exotic dancer and Tony’s star talent whose kidnapping sparks the event that lead to the beginning of the game (and of season one of the comic series- yep, Blue Estate is based on a comic book). She seems to be well-read when she quotes Lao Tzu but that is quickly overshadowed by Tony’s ‘colorful’ comments. Overall, I didn’t see any of the characters develop or grow and I didn’t find any of them to be likeable save for Cherry, and I think that she could have used more screen time or at least a more detailed back story.

The dialogue is cheesy and tries to be racy if not downright raunchy at times. It is fun to listen to the babbling narrator as he talks about Tony’s adventures and how he exaggerates every single detail that he picks up as he “investigates” Tony though. The Voice Acting overall is okay, and is fine most of the time, but it could definitely use some improvement here and there. They often try to imitate the tone of Sin City and Pulp Fiction but instead, start to become annoying- too monotonous and cheeky.

Blue Estate’s graphics look okay and I like the design of the weaponry, specifically Tony’s gold plated Desert Eagle. Everything looks pretty good throughout, and the graphics are colorful and presented in a smooth and interesting fashion. I have to go back to what I said above though, because I really didn’t like the animation on the enemies and their AI. Not only did they all move alike but they all looked alike too. Some improvement would have been nice here, and overall the graphics can be said to be “okay” at the most for a current-gen game.

Unfortunately, the music is not as solid as the graphical presentation and felt bland and repetitive. And more often than not, the tunes did not fit the mood or tone of the stages that you have to shoot your way through in Blue Estate. It’s nothing terribly bad going on with it, but for it to psyche a player up or at least get the player interested in the game, better music is needed and you won’t find it here.

Excellently done though are the cut-scenes. They’re wonderfully executed and reminded me of Ashley Wood’s take on the cut-scenes of Metal Gear Solid: Peace Walker. I liked the comic style and the artwork is terrific. If anything, the quality of the artwork in the game is its highest point of interest, and especially that of the cut-scenes.

Also surprisingly good are the controls, which feel great and the gyro-capable Dual Shock 4 is perfect for a shooter like this. I liked the layout of the buttons and I liked how intuitive shooting the enemies felt. One thing that could have used some work is the crosshair though. The crosshair, for some reason, moves away from the center of the screen requiring the player to manually reposition it instead of having it automatically snap back to a ‘ready position’. The game also made use of the Dual Shock 4’s trackpad (That’s an oddity -ed). To pick up items, to counter an enemy melee attack, to throw back a tossed Molotov cocktail, or to interact with objects, the game has the player swipe towards the left, right, up or down of the Dual Shock 4’s trackpad. It’s cool to see the pad used, but actually seemed distracting at times and in the end it had me holding my controller in an awkward fashion just to anticipate the Trackpad QTEs.

While this game or my review may turn away potential players, I would just like to say that I personally enjoyed my time with this one. While the game’s development may not have been the best, I liked the story and I liked the characters too; and, if anything, Blue Estate’s redemption lies in the fact that the game was made to make fun of itself in a way.

While it’s not the best shooter out there, I say give it a try when you can.