The Marvel TV lineup of Ultimate Spider-Man and The Avengers is making its way onto the printed page. 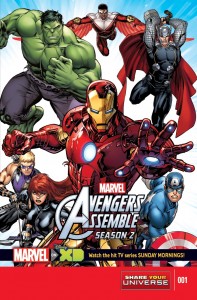 This November, the most popular Super Heroes in the world leap off the screen and land on the page for two new ongoing series based on the all-new animated series’ premiering this fall on Disney XD! Today, Marvel is proud to announce two new all-ages comic titles as part of the Marvel Universe line – Marvel Universe Ultimate Spider-Man: Web Warriors and Marvel Universe Avengers Assemble Season Two! Adapted by premiere all-ages writer Joe Caramagna and packed with bonus content, including brand new all-ages stories featuring The Avengers, Spider-Man, Nova and more, these two exciting new series are perfect jumping on points for new fans!

It all starts in Marvel Universe: Avengers Assemble Season Two #1! Twice the action, twice the danger! Earth’s Mightiest Heroes including Captain America, Thor, Iron Man, Black Widow and more return for another season of smashing evil! When the Red Skull seeks refuge on Earth from an even greater villain, the Avengers must face their greatest foe yet – Thanos of Titan! A new chapter in the story of the Avengers begins here – don’t miss it, true believers!

Then, swing in to an all-new era of adventure, as Spider-Man teams up with some of the Marvel Universes’ greatest heroes inMarvel Universe: Ultimate Spider-Man: Web Warriors #1! Spidey joins the one-and-only Captain America for a daring raid on the impenetrable fortress of Dr. Doom! Their mission: recover Cap’s shield! What could go wrong?

The biggest Super Heroes, the biggest action and the biggest stories you can imagine all collide in all ages excitement when the extra-sized Marvel Universe: Avengers Assemble Season Two #1 and Marvel Universe: Ultimate Spider-Man: Web Warriors #1burst on to the scene with can’t miss first issues this November!

And don’t forget to Share Your Universe every Sunday morning this fall inside Marvel Universe on Disney XD with Marvel’s Ultimate Spider-Man: Web Warriors premiering on 8/31 and season two of Marvel’s Avengers Assemble, premiering on 9/28! 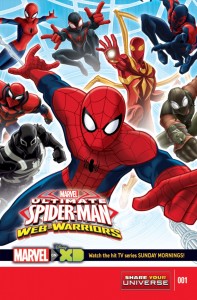 So while it looks like these comics won’t be a direct adaptation of the stories that you’ll see taking place in the Avengers and Spider-Man cartoon shows, they will be set within the same variation of the Marvel ‘universe’ that exists there. Whether the comics will ever be mentioned, or have an impact on, those shows remains to be seen though.

Regardless of continuity though, ,this is a great move from Marvel. I can remember very well, watching superhero cartoons as a kid then getting into the comics. In a way, the shows led me into reading more, which is fantastic for children and something that they always should do more of. Linking the comics to the shows (which are already quite popular) just makes total sense and should be even more tempting than, say, a child watching Ultimate Spider-Man and then picking up an issue of Amazing. Not to mention the fact that these books are way more tailored to a young reader and more than likely won’t feature any questionable content- just good old fashioned superhero action. And who doesn’t like that?

Jason's been knee deep in videogames since he was but a lad. Cutting his teeth on the pixely glory that was the Atari 2600, he's been hack'n'slashing and shoot'em'uping ever since. Mainly an FPS and action guy, Jason enjoys the occasional well crafted title from every genre.
@jason_tas
Previous New Bravely Second footage
Next Age of Wonders III expands with Golden Realms