A sequel to one of the best last-gen Resident Evil titles has been outed by Xbox.com, which listed the game as Biohazard Revelations 2, complete with box art. 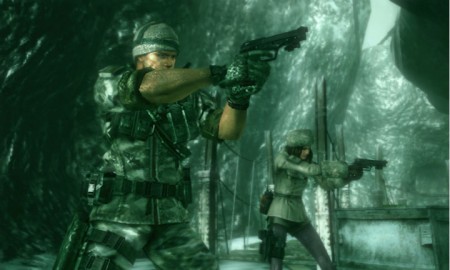 Gone from the website now (hence why you don’t see an image of the actual new box art here), but up for a while on Xbox.com as well as several European online video game storefronts, it looks like the next game in the Resident Evil series will be a direct sequel to Revelations. Resident Evil Revelations first appeared on the Nintendo 3DS (where it hands-down one of the best games on the console) before making the jump to the Xbox 360, PS3, Wii U, and PC in HD form.

Set largely on the ship adrift in the ocean, the title featured many of the main Resident Evil cast members (as well as new characters) and sent players on two branching quests with two teams of heroes, to stop a bio-terror group who were making all kinds of nasties. The biggest deal with he game though, was that it returned the series to it’s survival horror roots. In that way, it became something of a fan-favorite as Resident Evil 6 was universally panned critically and by hardcore fans of the franchise alike (though it sold very well).

As for the mistakenly announced Resident Evil Revelations 2, well, there’s really nothing to report other than it’s more or less a thing. Pulled by any and all sites that showcased it and not commented on by RE publisher Capcom, there’s really nothing further to report. It is interesting though, since the main series has shifted to more action than horror, that Capcom would be planning a return to Revelations and the slow, creeping horror that it represents. Don’t forget too, that the company is set to release (officially) the GameCube remake of the original Resident Evil on current consoles with enhanced visuals.

So the original, with that same old horror theme that fans love, and a game that returned the series to it for a brief time. Kind of makes you wonder if the next numbered entry will be a return to form as well, or if Capcom is planning on having a dual series kind of thing (sort of like Activision’s Call of Duty franchise) with Revelations representing the classic style and the main series being more action-focused. Stay tuned…

*Screenshot from the 3DS release of Resident Evil Revelations

Jason's been knee deep in videogames since he was but a lad. Cutting his teeth on the pixely glory that was the Atari 2600, he's been hack'n'slashing and shoot'em'uping ever since. Mainly an FPS and action guy, Jason enjoys the occasional well crafted title from every genre.
@jason_tas
Previous A new look at Skywind
Next 500 gigabyte Xbox 360 Hard Drive coming soon