Sakurai has confirmed that Meta Knight will be returning in Super Smash Bros. There’s no reveal trailer for him though. Instead, two screenshots have been posted on Miiverse. 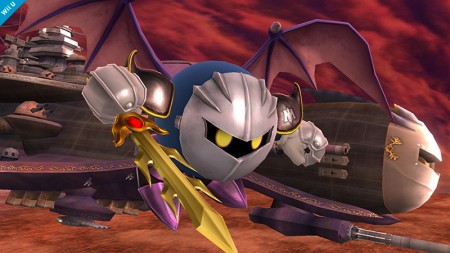 From what we can see here, Meta Knight has been given some nice polish. His gloves now have steel plating on them, and his mask has a bit of shine added to it. Both screenshots show Meta Knight fighting on his beloved flagship, the Halberd. The changes that Sakurai has applied to MK have been posted on Miiverse as well, no doubt in response to the outcry from fans. In Super Smash Brothers Brawl, he was considered one of the most overpowered characters in the game. Hopefully he won’t get nerfed too badly though, as he was indeed a very fun character to use.

So far, what we know is that the glide in Meta Knight’s shuttle loop has been taken out. This is probably due to the exploits people were using in the previous installment of Smash. You could glide under the stage indefinitely, waiting out your opponents as they slowly wear each other down; it was a fun little exploit, but sadly unfair. Now, instead of gliding you attack opponents twice while spinning in a huge loop.

Well, my name's Christopher Deleanides as you all know and I'm the Nintendo Editor here at BG. I've been playing video games since 1992, and I've been a Nintendo fan the entirety of those years. My love for video games as well as Nintendo hasn't changed, and probably never will. The only thing that comes close is politics, as I'm very deeply involved in both local and international issues.
Previous Gamescom 2014: Activision gets small with Skylanders Minis
Next ChAir announces new series of Infinity Blade collectibles