SDCC 2014: Bandai Namco brings a double dose of Pac-Man to the show

A pair of new titles for mobile platforms will be playable on the show floor at SDCC this week. 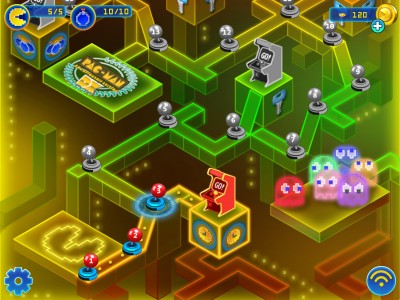 Pac-Fans take note, if you’re going to be at SDCC this week in San Diego, then you’re going to want to stop by the Bandai Namco booth and play some of your favorite game. One of the greatest video game characters of all time will be present and accounted for times two this week with Pac-Man Friends and Pac-Man CEDX.

PAC-MAN Championship Edition DX is the official sequel to one of the most beloved games of all time. PAC-MAN CEDX set the gaming world on fire with its critically praised and addicting gameplay. Now, all 3 original modes (Score Attack, Time Attack and Ghost Combo) are playable across 7 zones with over 150 levels of PAC- MAN action. Fun new power-ups and boosts will give you the leg up and the highest score in new, unending challenge modes. Combo ghosts, detonate bombs, collect fruit, and survive the infamous dark levels to become a PAC-MAN Champion!

Both new titles will be playable at the Bandai Namco booth on the show floor (#121), and you can pop by any time you like to go hands on. Of course, as with all things SDCC, the earlier the better to stop in as these kinds of things tend to get unwieldily in the queue department pretty fast.

Pac-Man Friends is set to arrive on mobiles this September and Bandai Namco is aiming at a November release for Pac-Man CEDX.

Jason's been knee deep in videogames since he was but a lad. Cutting his teeth on the pixely glory that was the Atari 2600, he's been hack'n'slashing and shoot'em'uping ever since. Mainly an FPS and action guy, Jason enjoys the occasional well crafted title from every genre.
@jason_tas
Previous SDCC 2014: IDW launches special Transformers comic Humble Bundle
Next SDCC 2014: IDW announces Orphan Black ongoing series