Well this kind of came out of nowhere. 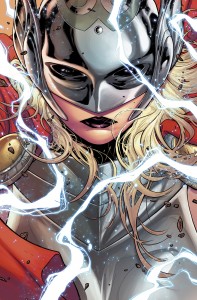 Marvel is excited to announce an all-new era for the God of Thunder in brand new series,THOR, written by Jason Aaron (Thor: God of Thunder, Original Sin) complimented with art from Russell Dauterman (Cyclops).

This October, Marvel Comics evolves once again in one of the most shocking and exciting changes ever to shake one of Marvel’s “big three” – Captain American, Iron Man and Thor – Marvel Comics will be introducing an all-new THOR, GOD OF THUNDER. No longer is the classic male hero able to hold the mighty hammer, Mjölnir, a brand new female hero will emerge will who will be worthy of the name THOR. Who is she? Where did she come from and what is her connection to Asgard and the Marvel Universe?

“The inscription on Thor’s hammer reads ‘Whosoever holds this hammer, if HE be worthy, shall possess the power of Thor.’ Well it’s time to update that inscription,” says Marvel editor Wil Moss. “The new Thor continues Marvel’s proud tradition of strong female characters like Captain Marvel, Storm, Black Widow and more. And this new Thor isn’t a temporary female substitute – she’s now the one and only Thor, and she is worthy!”

THOR is the latest in the ever-growing and long list of female-centric titles that continues to invite new readers into the Marvel Universe. This female THOR is the 8th title to feature a lead female protagonist and aims to speak directly to an audience that long was not the target for Super Hero comic books in America: women and girls.

For more on all things Marvel, follow us on Facebook at www.facebook.com/marvel and be sure to stop back continuously to see what everyone is saying about Marvel’s latest news.

Also, join Marvel this year at San Diego Comic-Con and for more on Marvel’s latest announcements please visit Marvel.com. Join the conversation on Twitter with #MarvelSDCC and don’t forget to follow us at @Marvel. 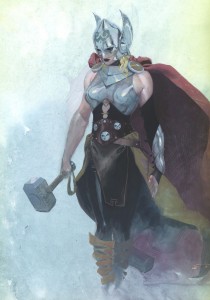 Okay. So… Things I like; I like the fact that Thor (the real Thor) is still around, but something’s happened to him and he can’t wield the hammer anymore. And that Marvel is releasing another book with an eye towards the ever-growing army of female comic fans out there. I can’t say I’m too crazy about seeing another major Marvel character shaken up this violently again though.

Lest we forget, it wasn’t all that long ago that Spider-Man was Doc Ock in secret, and now Captain America isn’t Cap anymore and Wolverine is dead and Thor is, well, someone other than Thor. I have no issues with this being a female-led book by the way, that’s more than fine by me, and for the record, I wasn’t a big fan of Thunderstrike either. I honestly just like my iconic heroes to be the iconic heroes that I grew up with. And no, I really don’t care how that sounds.

Anyway, it’s unclear how long this new hammer-slinger will hold Mjolnir or when (maybe if) Thor (the guy) will return to action. As to when all this is set to go down, you can look for issue #1 of Thor to hit stands this Autumn.

Jason's been knee deep in videogames since he was but a lad. Cutting his teeth on the pixely glory that was the Atari 2600, he's been hack'n'slashing and shoot'em'uping ever since. Mainly an FPS and action guy, Jason enjoys the occasional well crafted title from every genre.
@jason_tas
Previous Usagi Yojimbo: Traitors of the Earth (Comic) Review
Next OlliOlli rolls onto the PC, Mac, and Linux