Baltimore takes on the Witch of Harju in new series 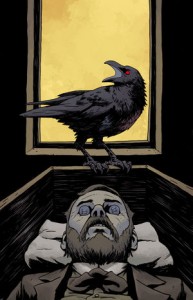 Baltimore shelters a woman on the run from a possessed dead man and the witch playing his puppet master.

The preview text might not be all that lengthy, but I can’t say enough about Baltimore in general. Like Criminal Macabre, Baltimore has pretty quickly gotten my attention and risen right to the top of my favorite bizarro books to read.

Generally I’m not much of a horror fan either, but Dark Horse has a phenomenal stable of horror that’s just plain cool and most of all- smart. Baltimore certainly fits right into that mold. If you’ve never read it, basically and in a nutshell, Lord Baltimore is a monster hunting machine and does battle with all manner of beasties and undead creeps in a semi-steampunk universe.

Coming from the minds of Mignola and Chris Golden, as well as the talented pencils of Peter Bergting, the first issue of Baltimore: The Witch of Harju is set to hit stands on July 30th with cover illustration by Ben Stenbeck. If you haven’t given it a shot just yet, this first issue of a brand new arc is a very good place to dig in.

Click the thumb to the left for a full preview.

Jason's been knee deep in videogames since he was but a lad. Cutting his teeth on the pixely glory that was the Atari 2600, he's been hack'n'slashing and shoot'em'uping ever since. Mainly an FPS and action guy, Jason enjoys the occasional well crafted title from every genre.
@jason_tas
Previous Science reopens The Unexplained Files on July 29th
Next The final chapter of The Wolf Among Us wolfs out this week