WonderCon: Harbinger coming to a close, ushering in Harbinger: Omegas and more

Harbinger #25 will mark the final issue of one of Valiant’s finest books this coming July and make way for the Harbinger: Omegas limited series and possibly more. 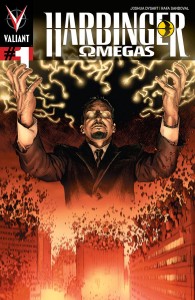 This comes was a little bit of shock actually, since Harbinger is pretty widely recognized as one of Valiant’s consistent best, but the publisher announced this past weekend at WonderCon that it would be ending with the fallout from the Death of a Renegade story arc tho Summer. For writer Josh Dysart, this is the culmination of a lot of preparation and story work.

“I’ve always tried to remind readers that these are kids and they’re in over their heads and they’ve never been very good at what they do. There’s just repercussions to this kind of behavior even if you have superpowers,” writer Joshua Dysart told Comic Book Resources. “That’s what we’re moving toward, we’re moving toward that final statement – really saying that strongly for the reader, ‘This is what the story was always about.’ It was about inexperience in the face of great danger.”

The death of a character and the main book doesn’t signal the end of the brand though as Valiant says that the all-new Harbinger: Omegas will pick up after the ending of the plain old vanilla Harbinger book this July. Omegas will shake things up considerably in the Harbinger corner of the Valiant Uas the Dysart and Rafa Sandoval headed series will run a total of three issues and flip the script on Toyo Harada amongst others.

Harada will be making the leap to more of a standard ‘supervillain’ (with the usual Valiant twists and turns) and the survivors of the Renegades will be loping for ways to continue on abad fight the good fight after whatever happens in Harbinger #25.

“[HARBINGER: OMEGAS is] about both the surviving members of Harbinger and how they move on from the loss and the finality of the event at the end of the Harbinger book; and it’s also about Harada rebranding, changing his empire, dismantling Harada Global HTC and refashioning himself as really, for lack of a better term, what we would see as a more traditional super villain in comics, because he hasn’t been given a choice,” said Dysart. “It’s a bridge story about the change in these environments and how we’re going to get to the next chapter of the Valiant Universe.” 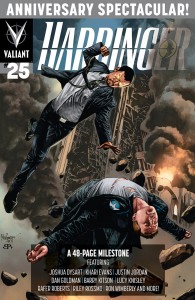 If you’ve been missing out on Harbinger, now’s the time to hop onto comiXology or head down to your LCS and stock up on back-issues. This is flat-out one of the most enjoyable superhero books on the stands and a top contender for Valiant’s best. Catch up before the end, and the new beginning. Oh, and as to that… Valiant says to stay tuned, because Harbinger doesn’t end with Harbinger: Omegas’ three issue run either.

More to come on this one as 2014 rolls on into Summer and the SDCC this July. And speaking of July, you can look for Harbinger #25 to arrive on the racks, in all its oversized 48 page glory, that same month.

Jason's been knee deep in videogames since he was but a lad. Cutting his teeth on the pixely glory that was the Atari 2600, he's been hack'n'slashing and shoot'em'uping ever since. Mainly an FPS and action guy, Jason enjoys the occasional well crafted title from every genre.
@jason_tas
Previous Demonic or heroic? Choice defines your character in Bound by Flame
Next Van Helsing II available for pre-order on Steam