Iron Man takes on Hulk over an old secret in Original Sin #3.1

Did Tony Stark have a hand in creating the Incredible Hulk? That could be just the case as the latest secret is revealed in Original Sin #3.1. 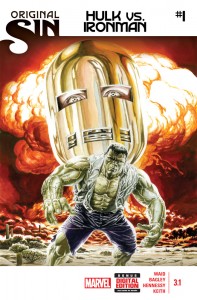 As far as ‘news’ coming out of Original Sin, Marvel Comics’ latest crossover event, this is one monster-sized nugget. If Tony really did help to detonate that Gamma Bomb and thus create the Hulk from Bruce Banner, that changes a lot of history in the Marvel U in some very new ways. These two characters have a pretty deep history too, so everything that’s happened before takes on something of a new hue with this revelation.

Bruce Banner and Tony Stark are in for an emotional roller coaster, courtesy of Mark Waid and Kieron Gillen! Fans have been in love with their often assisting, yet dueling dynamic for years – but now the Jade Giant and the Armored Avenger are on a collision course like never before!

Hulk and Iron Man editor Mark Paniccia said, “People have been digging the love/hate relationship between Marvel’s polar opposite geniuses both on screen and in the comics. We’re delving into some really compelling history with Tony and Bruce…some very cool dots will get connected and you’ll see one of the best superhero fights in history.”

Hulk vs Iron Man will run from Original Sin #3.1 through #3.4, and you can be sure that there’ll be plenty for fans of both characters to dig their teeth into before the arc comes to a close. And this is just one of the big stories to spin out of Original Sin, a book that will flat-out change how you think of many of the biggest characters in comics.

Check out Original Sin #3.1 when it releases in June from Mark Waid, Mark Bagley and, of course, Marvel Comics.

Jason's been knee deep in videogames since he was but a lad. Cutting his teeth on the pixely glory that was the Atari 2600, he's been hack'n'slashing and shoot'em'uping ever since. Mainly an FPS and action guy, Jason enjoys the occasional well crafted title from every genre.
@jason_tas
Previous New Titanfall patch goes live
Next Amazon to acquire comiXology