Bad news for those thinking of purchasing Star Parodier soon, the game has been taken down from the Wii virtual console. 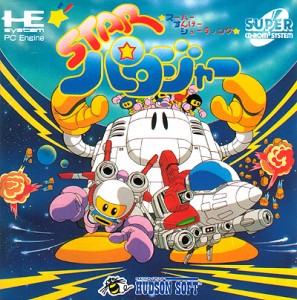 Chances are Nintendo and Konami will arrange for something via the Wii U in the future. After all, games like Contra 3 have made their triumphant return on the Wii U eshop. For those of you that do not know, Star Parodier is a shoot ’em up (or shmup for short) that was originally released for the PC Engine. Like Parodius, it’s a parody shooter, and is a culmination of various tropes that have appeared in past Hudson games. Characters like Bomberman, PC Engine and Paro Ceaser from the Star Soldier games. The characters themselves are really ships controlled by pilots from the inside. Each has a unique set of attacks that can be strengthened as you collect more powerups.

Bomberman naturally fires out bombs, PC Engine fires CDs, and Paro Ceaser uses powers from the Star Parodier games. The game is fairly mild in difficulty as far as shmups go, and can be beaten by just about anyone with enough practice. That’s not to say this game is a pushover, but it’s not as frustrating to play as most games in its genre. Star Parodier is also a very light-hearted game, full of color and cheerful looking environments. If you ever get a chance, try it out; it’s not a game you want to miss out on. Let’s hope Konami has a desire to re-release it for Wii U, and Nintendo is receptive to a proposal for re-release.

Well, my name's Christopher Deleanides as you all know and I'm the Nintendo Editor here at BG. I've been playing video games since 1992, and I've been a Nintendo fan the entirety of those years. My love for video games as well as Nintendo hasn't changed, and probably never will. The only thing that comes close is politics, as I'm very deeply involved in both local and international issues.
Previous Sunday Review: The BG archive for the week of 3-24-14
Next Release date for Mind Zero announced