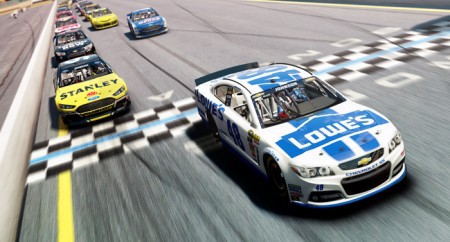 Racing fans, rev up your engines and vie for position as Nascar ’14 roars onto gaming platforms. Offering an incredible amount of realism for gamers of every skill level, it’s a game that will have you hooked on Nascar before you round the first curve (as if you weren’t already).

As you begin the game, you’ll have the opportunity to customize your racer to your preferred name, sex, nationality, team, and even car number and manufacturer. This is all editable once you’ve gotten into the game, but it makes it easy to make the game yours, right from the start.

Once you have your racer all sorted out, it’s time to get in the game. You can start off with a quick go at single player mode, where you can play a season as your favorite driver, do some quick races on any track, or try out some challenges for a little variety. If one-on-one isn’t your style, go for some multiplayer with friends. Online and split screen multiplayer are both available, and you can even set up online leagues for up to fifteen racers.

Or, you can head straight for a career. Like the rest of the game, Career Mode is set up with realism in mind. Whether you want to complete every bit of every track, from practice to qualifying to race day, or head right to the track for the final event; Nascar ’14 gives you tons of options.

For those of us who may not be a natural at racing right from the start, the game helps you set up some assists after your first trial run. But again, these are completely customizable to your preferences, should you choose to tweak it yourself. In addition to the assists, you can also tailor the race itself to your liking.

From basics like difficulty, length of the race, rates of tire wear and fuel usage, and even use of flag rules and how damage is applied; it can all be adjusted for each race weekend. If you’re just starting out but want to make it through the races, you can turn damage to visual only or even off completely, giving you a fighting chance to race long enough to get a little practice in. It’s also great for those times where you don’t have a lot of time, but want to squeeze a few races in anyway. 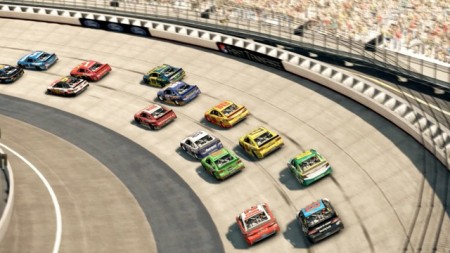 Your very first racetrack is the unparalleled Daytona International Speedway. You’ll have the opportunity to duel your way to pole position as the instantly recognizable voices of Darrel Waltrip and Mike Joy announce the race.

Since you are the rookie, you’ll have to perform well if you want to earn those coveted sponsorships, and the voice of your spotter will do a lot to get you there as he calls out tips and warnings like, “Watch the wall, buddy!” The brake indicator gives you a heads up when you’re entering a curve too quickly too, giving you a little assist until you learn the tracks yourself. For each race, you are given the opportunity to participate in as little or as much of the entire race weekend as you’d like, making this a game with nearly endless racing available to you.

The races themselves are super challenging. With forty cars on the tracks, just trying not to get knocked out of the race will keep you on your toes through cautions galore (particularly on short tracks). Rather than guiding you specifically through the game, Nascar ’14 instead gives you the chance to learn by trial and error – just like the real thing. The settings, sponsorships, and more that are right for you just take a whole lot of old fashioned effort to figure out.

When things get tense, there’s always the time honored tradition of turning your Nascar game into an awesome crash-up derby game for a few laps of stress relief. Grab a friend, power up multiplayer, turn cautions off and damage all the way up. From there on out it’s a hilarious race to cause the most spectacular pileups without getting knocked out of the race. I’ve been doing this for over a decade of Nascar games, and it honestly never gets old. 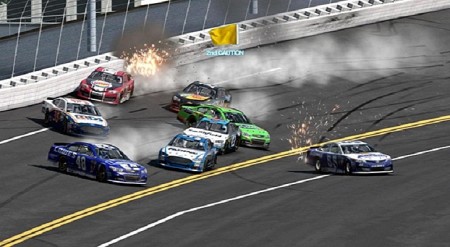 Nascar ’14 is a nicely done racing simulation that scores high on realism and options.

By giving players control over every aspect of the race, it both offers a learning curve to those who need it and more of a challenge for those who don’t. With a variety of races available, it’s sure to help you get your Nascar fix on the long wait till the weekend races.

Sega and Relic are taking strategy gaming back to the war-torn battlefronts of WWII Europe. …