The X-Files may not be on the TV anymore, but it’s still going strong thanks to a popular comic book and now board game from IDW Games. 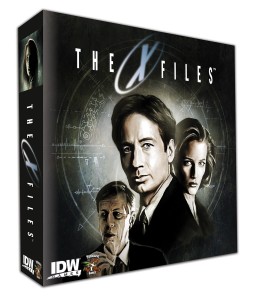 “To me, there’s no more exciting title than The X-Files,” says IDW Director of New Business, Jerry Bennington. “Who wouldn’t want the chance to play as the wise cracking Fox Mulder or the incredibly intelligent Dana Scully? And what show created more classic villains than The X-Files? I still remember the first time I laid eyes on Flukeman, now we’ll give fans the chance to lose sleep all over again!”

Hmm, never really thought of Mulder as the wisecracking type. But I guess he kind of is?

Anyway, if all those references above made you think of the stunningly great first few seasons of creator Chris Carter’s The X-Files (before it was just ‘great’ later on), then you’ve got a good memory. That’s because the board game is based on the first three seasons of the show in particular. The idea is to give fans the chance to start from the top and play through the TV show’s first few forays into the strange and unknown.

Designed by famed board game creator Kevin Wilson, this new strategy game will feature the art of menton3, who’s the current penciler on The X-Files: Season 10 comic book. The game will feature a play time of about 60-90 minutes, which isn’t super-long or short. Kind of a nice little splitting of the difference actually.

The storyline(s) hasn’t been detailed all that well at this point, but you can expect to play as Mulder, Scully, and the rest of the characters from the show as you face off against the Cigarette-Smoking Man and the Syndicate. Fans should remember that group as the main antagonists from the overarching narrative that drove the show and the fan-favorite ‘mythology’ episodes. Personally, while I always liked the stand-alone one shots like Flukeman, it was the alien-tinged, conspiracy-centric installments that always got me coming back to watch every week.

Actually… I don’t know any fans of the show where that wasn’t the case.

Expect to see The X-Files game on the shelves and at internet retailers this June from IDW Games. It’ll cost you $59.99 USD for a copy.

Tags board games IDW The X-Files

Jason's been knee deep in videogames since he was but a lad. Cutting his teeth on the pixely glory that was the Atari 2600, he's been hack'n'slashing and shoot'em'uping ever since. Mainly an FPS and action guy, Jason enjoys the occasional well crafted title from every genre.
@jason_tas
Previous New Transformers Prime series casts Bumblebee in the leading role
Next Warner Bros announces shiny new Gauntlet