Is the entire universe about to fall apart because Hank McCoy brought the original X-Men into the present?. 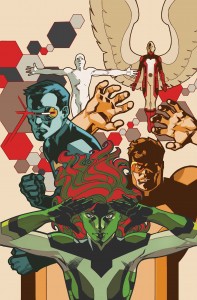 They have ventured from the past to an uncertain future, but the All-New X-Men were never meant to stay. When a mysterious stranger visits the Jean Grey School, Hank McCoy will learn the disastrous effects he has wrought by disrupting the timestream. Consequences that could destroy the entire universe! Is it too late to stop its cataclysmic side effects? Find out when the oversized, overstuffed ALL-NEW X-MEN #25 hits comic shops this April!

Well, we knew this was coming for some time now and here we are. The Marvel Universe has been showing signs of ‘wear’ as of late with all the ripping and pulling at the actual fabric of space/time and one of the biggest anomalies around are the All-New X-Men.

The mutant teens, ripped from the formative days of the super-team, were brought to the present by Beast and till now have been living as normally as can be expected. At this point though, things start to turn for the worst.

It should be interesting to see where this all goes to say the least. Personally, I’m hoping that well see something like a soft reboot of the Marvel U, something that’d streamline the events of the last few decades into a more iconic meld of the classic universe melded with the Cinematic Universe. That’s me though; we’ll see where it actually goes.

One thing’s for sure though, the first few stages of what’s coming will be felt right here in the pages of All-New X-Men #25 when it hits the stands on April 9th. Also very cool about this one, by the way, is that Marvel has a massive lineup of artists on hand for the issue. Seriously, this is a monster.

Jason's been knee deep in videogames since he was but a lad. Cutting his teeth on the pixely glory that was the Atari 2600, he's been hack'n'slashing and shoot'em'uping ever since. Mainly an FPS and action guy, Jason enjoys the occasional well crafted title from every genre.
@jason_tas
Previous D-Link Gaming Router AC1300 (Hardware) Review
Next Call of Cthulhu: The Wasted Land (PC) review