Should you answer the call of this iOS title turned PC game? 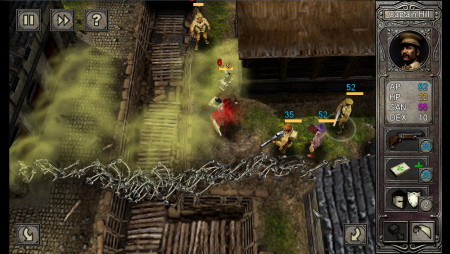 Call of Cthulhu: The Wasted Land, not to be confused with Call of Cthulhu: Dark Corners of the Earth (also known as the good Cthulhu game), is an RTS game designed by Red Wasp Design Ltd., who have created such horrors that would inspire Howard Phillips Lovecraft himself like… well… this game.

(Before we start the review, yes, I know that this game was based on the pen-and-paper RPG)

The Wasted Land starts out in the trenches of a World War 1 battlefield (during a bombing I assume, as the only sound effect was the occasional whistle and explosion of a bomb), where the “American” Professor by the name of Brightmeer meets up with two of the games other main protagonists: Sid Brown, and Captain Hill. Things take a turn for the worst, however, when men wearing black robes dash attack them. You later find out that these are occultists, for there are strange things afoot. 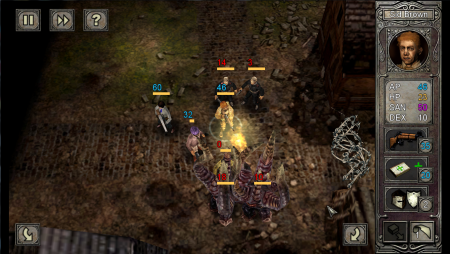 The game itself played pretty well, once I figured out what to do. I was so busy complaining to myself about the bad graphics (which I will cover later) and lack of instructions, that I didn’t notice the ‘help’ button (represented by a question mark), which lists all of the buttons and what their functions are. There is no ‘objectives’ tab in the pause menu, by the way; to access your current objectives, you have to click on the character’s terrifying CGI face on the top right part of the screen.

I would also like to point out one of the most annoying things that happened to me during my playthrough…On the very first level of the game, after exiting the trenches, I got ambushed by a large amount of robe-wearing Germans and died. Several tries later, I managed to plan it out well enough that I killed all 20 (I counted them, by the way) enemy soldiers, only to figure out that the area I was supposed to go to first, had been back in the trenches all along. I made my way back, and the very moment I stepped on the tile I was directed toward, the 20 soldiers magically respawned, and I had to fight my way back through to get to the other side of the battlefield.

Now, as for the graphics I mentioned earlier, The Wasted Land was originally a game designed for iOS devices (aka iPads, iPods, and iPhones). You’d think that somewhere along the way to the PC, they would have upgraded the graphics even slightly? No, they didn’t, the graphics on both platforms run, look, and sound the exact same. 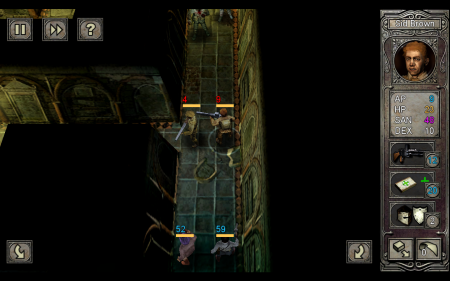 On a side note, the shop system is absolutely atrocious. During my entire time playing, never once did I figure out how to buy anything, not even clicking that helpful little question mark did a thing for my shopping experience (Oh, listen to me, I sound like an old woman critiquing a grocery store).

If you were to ask me why I haven’t mentioned the music yet, my reply would be: “What music?”. That’s right, the game severely lacks not just music, but sound in general. The only three sound effects that I can recall are the annoying clicking sounds of menu buttons, and the sound of guns on the battlefield, and guns off in the distance. Some music, even basic, cringe-worthy music is much needed in any game- including this one.

While I understand that I have been ragging on this game quite a lot through this whole review, understand that my playthrough was not completely devoid of fun. Sometimes I catch myself having a laugh, either because one of the stupid AI enemies did something funny, or because the game itself, with all it’s flaws, can be pretty solid at times. The combat is enjoyable, if a bit simple (and hard at first), the story can be entertaining at times, and I find the characters loveable if for no other reason than I like to imagine all of them having extremely over-the-top English or Scottish accents.

Basically, I didn’t enjoy Call of Cthulhu: The Wasted Land.

I’ve played worse games, but I’ve played a lot of better ones too. Keep in mind, this is my opinion on the PC version of the game; had I played the version on an iPod or iPad first, the opinion might be different. And this might sound odd, but CoC:TWL, reminds me of Angry Birds.

Why? Because just like Angry Birds, you wouldn’t play it when you are at home, where there are better things to play. You would play it while standing in a doctor’s office or while waiting for a flight, or say… I don’t know, waiting in line at a midnight release to buy a better game.

Five parts actual review, 2 parts sarcasm, 2 parts bad puns, and one part self loathing = one of my game reviews.
Previous The All-New X-Men face a crumbling timestream in issue #25
Next Train, play your games, and eat your vitamins- here are 7 tips for healthier gaming