The new era in the Marvel Universe’s cosmic history continues withe a whole new comic featuring the Sentinel of the Spaceways, Silver Surfer. 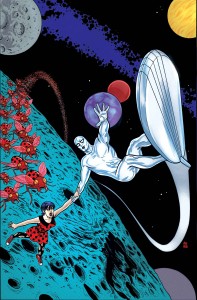 This March, the sentinel of the skyways blasts off for an all-new adventure in the thrilling SILVER SURFER #1 – from New York Times Bestselling writer Dan Slott and critically acclaimed artist Mike Allred! Silver Surfer #1 continues the exciting wave of All-New Marvel NOW! launches with a fresh take on Norin Radd and his cosmic quests!

“It’s fun, it’s full of adventure, and it wears its love of the Marvel Universe on its sleeve,” says Slott in an interview with Marvel.com.

The universe is big. Bigger than one could ever imagine, even one such as the Surfer. Propelled by the mighty Power Cosmic, long has he voyaged alone – journeying from star to star. But soon he’ll discover that the best way to see it…is with someone else. Meet the Earth Girl who’s challenged the Surfer to go beyond the boundaries of the know Marvel U – and into the strange and unknown!

“One of the limitations of the Surfer character is that, by his nature he’s alone most of the time,” says Executive Editor Tom Brevoort. “So right off the bat, we’re giving him somebody new to bounce off of: the new character Dawn Greenwood. The two of them wind up traveling together, and this gives the Surfer somebody to bond with and relate to along the journey.”

Hop on board and hang ten when the most far-out series of All-New Marvel NOW! makes its epic cosmic debut this March! Hang on! This is the all-new SILVER SURFER #1!

Tying the Surfer into a love-interest is certainly something new for the character. He’s always not only been a solitary character, but every linked to his original love, his left-behind wife Shalla-Bal from his home world of Zenn-La. This is a pretty big departure when you take that into account.

Marvel’s been shaking up so many of its long-time characters in the past few years though, that it’s probably past the time for Norrin to get the same treatment. Silver Surfer, even though he’s a staple of the Marvel U for decades, hasn’t ever been the most exciting of characters anyway, so maybe a little kick in the caboose is what he needs to start up and sustain an ongoing book of his own once again.

It also doesn’t hurt that Dan Slott (of Spider-Man fame… and infamy) will be penning the tale and the always-popular Mike Allred will be contributing the pencils. That’s an A+ team on Silver Surfer and is sure to get a few readers just because of it. Find out what strange new worlds the Silver Surfer will voyage to when issue #1 hangs-ten onto comic shop racks on the 26th of this month.

Jason's been knee deep in videogames since he was but a lad. Cutting his teeth on the pixely glory that was the Atari 2600, he's been hack'n'slashing and shoot'em'uping ever since. Mainly an FPS and action guy, Jason enjoys the occasional well crafted title from every genre.
@jason_tas
Previous The original Shin Megami Tensei to collect some demons on iOS
Next The Walking Dead season 2, episode2 lurches onto download platforms this week