Seiken Densetsu 3 (Legend of the Holy Sword 3 in English), is the sequel to Secret of Mana on the Super Nintendo, a hidden gem that westerners never got a chance to play. 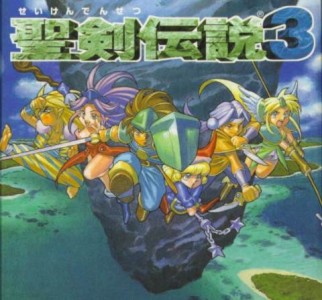 Seiken Densetsu 3, published and developed by Square is a wonderful RPG that should have hit western shores, but unfortunately never did. It came out for the Super Famicom during that awkward period in the SNES‘s life, where development was being shifted to the Nintendo 64, and most titles relegated to Japan only. Many great games never left Japan at that time, this game included.

Seiken Densetsu 3 perfected the Mana series’ gameplay, making it arguably the best title in the series. Some key differences are being able to freeze the game while choosing items and spells in the ring menu, spells getting stronger based on your level of magic, and the charge up gauge replaced with the a gauge that builds up each time you attack an enemy. It gets larger over time, enabling you to use higher levels of special attacks. When it charges up to a certain level, you get to attack an enemy with a special move. Earlier movesets are something simple like a heavy slash with a weapon; later on you gain some very powerful abilities that can attack all enemies on screen or do some massive damage.

Unlike the first game, you have a storage to hold any excess items. It comes in handy later on when you’ll get showered with healing items. You have six characters to choose from, and can make a party of up to 3 of them. Each has their own unique story that they start out with, and you choose which one is the “leader” so to speak. The leader of the party starts the game off, and you’ll play through their intro. The game is multiplayer, but unfortunately, it doesn’t allow for 3 players like Secret of Mana did. The difficulty varies depending on what characters you choose, but differences are too big. It’s recommended that you get someone like Carlie in your party, as the game gets incredibly hard later on without a dedicated healer.

The gameplay, like its predecessor, is real time. You continuously attack the enemy while you freely move around the area you’re exploring. You can pull up the ring menu at any time to use special attacks and items. You can also choose to run away by moving away from the enemies. Boss fights are particularly engaging and fun, they can get pretty frantic at times. As you battle, you’ll need to switch between controlling the main character and others as well if you’re to survive. Leaving the AI completely to itself is not advised. It really adds to the strategies that you’ll use, and makes for a deeper gameplay experience. The characters themselves aren’t too dynamic and there isn’t much development. However, the stories are very entertaining and interesting, each with its own unique twist. There are three different final bosses you can encounter depending on the party members you choose. They all vary in difficulty as well. There are even different bosses you fight, depending on the characters you select. 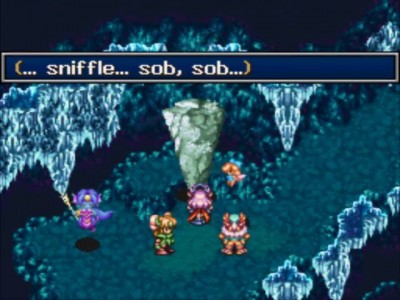 One particular thing that was very well done, is the production of this game. The graphics are just amazing. What Square pushed with this title to this very day amazes me. The sprite animation, the colors, attention to detail, it’s a work of art to say the least. The musical score is also very pleasing, the final boss theme in particular is a beautiful piece. That being said, the game isn’t flawless. One major complaint I have is a certain area in Maya with an very inconvenient save point. If you’re low on HP and want to come back to town, you have to go through a series of inescapable battles to return. Depending on your situation, you could very well restart your entire file, as you’ll just die each time you try to make it back to the town to heal up. It’s a major flaw I’d say, as it can potentially ruin the experience you have playing the game.

With that particular area in the game aside, I still say this game is beautifully crafted, and true gem that westerners unfortunately never got a chance to try. If you know Japanese or have a translation guide, I highly recommend trying this game out. It’s arguably one of Square’s greatest masterpieces and a splendid addition to the SNES library.

Well, my name's Christopher Deleanides as you all know and I'm the Nintendo Editor here at BG. I've been playing video games since 1992, and I've been a Nintendo fan the entirety of those years. My love for video games as well as Nintendo hasn't changed, and probably never will. The only thing that comes close is politics, as I'm very deeply involved in both local and international issues.
Previous Batman: Arkham Origins Blackgate HD announced for consoles and PC
Next RoboCop vs the Terminator heads back to print