Archer & Armstrong meet Bloodshot and the H.A.R.D. Corps in Mission:Improbable

The new storyline kicks off in Archer & Armstrong #18 as Project Rising Spirit targets the pair of globetrotting heroes for extermination. 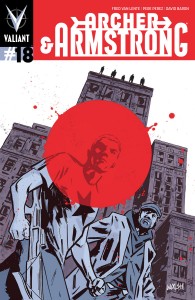 Archer & Armstrong have been targeted for elimination by Project Rising Spirit’s most elite kill crew. (G-G-GULP!) Their mission? Assassinate the the newly appointed leader of a homegrown fundamentalist terror sect named…Obadiah Archer?! And if they could take out his mentally ill, alcoholic bodyguard who just happens to think he’s a 10,000-year-old immortal, that’d be swell too! Hot on the heels of today’s Archer & Armstrong: Archer #0, the showdown of the year begins right here on March 5th!

With each issue featuring a new interlocking Pullbox Exclusive Variant for comic shop subscribers by artist Jorge Molina (X-Men), don’t miss a perfect a jumping-on point for two of the most over-the-top action books on the stands when MISSION: IMPROBABLE kicks down the doors of Archer & Armstrong #18 and Bloodshot and H.A.R.D. Corps #20 – in comic shops everywhere this March!

Well this should be a fun one. Archer and his immortal buddy Armstrong probably aren’t exactly what Bloodshot and his crew are expecting to find in a ‘fundamentalist’ leader and his bodyguard. I have to say though, as a reader of the book on a regular basis, I love that description of Armstrong. Of course, he actually is an immortal. One who really doesn’t dig people (enhanced or no) trying to kill his friends.

Watching Bloodshot go toe-to-toe with him is probably worth the price of admission alone. Check out Archer & Armstrong #18 and the first round of Mission: Improbable when it hits the stands on March 5th, then grab the counting story’s next installment when Bloodshot and H.A.R.D. Corps #20 arrives on March 12th. The action picks up again in April when Archer & Armstrong #19 and Bloodshot and H.A.R.D. Corps #21 arrive- all from Valiant Comics.

Jason's been knee deep in videogames since he was but a lad. Cutting his teeth on the pixely glory that was the Atari 2600, he's been hack'n'slashing and shoot'em'uping ever since. Mainly an FPS and action guy, Jason enjoys the occasional well crafted title from every genre.
@jason_tas
Previous Borderlands 2 officially unveiled for PS Vita along with bundle pack
Next Dead Island: Epidemic starting up closed beta soon