The Avengers take on the Apocalypse twins as Ragnarok Now rolls on. 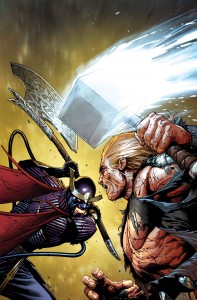 Today, Marvel is pleased to present your first look at UNCANNY AVENGERS #16 – from rock star creators Rick Remender and Steve McNiven! Mutants are disappearing all over the world – transported to into the clutches of the Apocalypse Twins by the Scarlet Witch’s last desperate act. Now, with no time to mourn the fallen, the remaining heroes of Earth must rally to stop the unimaginable horror the Apocalypse Twins have unleashed and save humanity and mutantkind alike! And there is one who will not kneel before would-be conquerors…vengeful and feral after the death of his teammates, Thor is a mad god out for blood – and he has his sights set on Uriel! It’s the God of Thunder vs. the Angel of Apocalypse as these two titans come to Earth-shattering blows! Plus, in order to stop the Twins, the Wasp must do something that will curse her evermore! Can the Earth be saved? Or is it too late? Find out as the epic Ragnarok Now continues in UNCANNY AVENGERS #16!

Apocalypse is a deadly adversary in any form and now that there’s two of the villain to contend with the Avengers have had a real fight on their hands. Of course, I don’t think that old ‘Poky has ever battled the God of Thunder before- and he definitely hasn’t faced him this pissed off.

Catch Thor and the Apocalypse Twins when they square off in Uncanny Avengers #16 this January the 29th from Marvel Comics and the team of Rick Remender and Steve McNiven.

Jason's been knee deep in videogames since he was but a lad. Cutting his teeth on the pixely glory that was the Atari 2600, he's been hack'n'slashing and shoot'em'uping ever since. Mainly an FPS and action guy, Jason enjoys the occasional well crafted title from every genre.
@jason_tas
Previous CES14: Razer announces new wrist-mounted multi-use device
Next CES14: Amped Wireless gives a big time boost to wireless networks