Sonic Lost World is a game that had lot of promise, but ultimately fell short due to some poor design and a lack of polish. 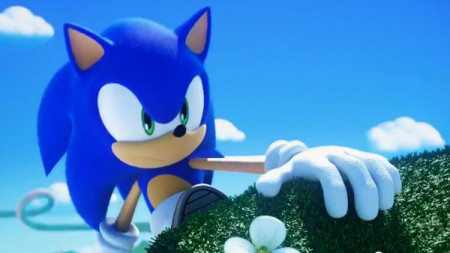 Sonic Lost World is mix of frustratingly bad mechanics, and some innovative level design. Sadly, the game seems to go off the deep end and employs a generous amount of nonsensical gimmicks.

While the 3D stages are for most part rather good, the way Sonic controls seems to dampen the experience. You want to enjoy yourself because the levels actually do seem rather interesting. The gravity based platforming on crazy and out of this world terrain feels good, and you do it all at a comfortable speed. However, very frequently the flow gets interrupted by Sonic randomly clinging to the walls, suddenly flying off into the abyss for no reason, or just poor enemy placement.

The gimmicks the developers tacked on often feel clunky and just downright tedious. From being stuck in a giant snowball that barely trudges its way through an entire level, to navigating Sonic as a drill through the dirt, the game is littered with these strange and unpleasant sections.

In the snowball’s case, it was an entire level where you slowly roll around narrow surfaces, trying your best not to hit even one enemy, for fear that it will instantly knock you into the abyss. Any attempt to speed up the process by spin dashing will most likely result in the snowball sliding off the edge of the stage.

The 2D sections were arguably the most aggravating part of this game, as they seemed like a culmination of everything that’s wrong with Sonic Lost World. Sonic’s speed cap is rather low, with little to no momentum.  Instead, you have to rely on the speed boosters to propel you upwards; your spin dash is largely useless in getting you up large hills.

The height of Sonic’s jump is alright so long as you remember to hold the jump button down, but it lacks velocity. Enemy placement oftentimes seems off, as you’re hitting badniks in spaces where you’re required to pass by, but have little to room to maneuver. Huge chunks of these levels are generally devoted to gimmicks such as the drill wisp.

The parkour system is an interesting mechanic, and one that had promise, but wasn’t adequately utilized. Sonic has the ability to climb up walls just by running towards them as you hold down ZR. You can also hold onto edges using his new acrobatic abilities too. While it is handy and can be put to good use on occasion, often enough you just found yourself randomly sticking to surfaces, cutting down on your speed. Sometimes sticking to walls can mean your death, as you try to re-adjust yourself, only to fall into a bottomless pit.

Aesthetically, Sonic Lost World is beautifully crafted. Whether it’s a white sandy beach, a lush forest in the sky, or a jungle, you’re always in a very lively and charming environment. The game really does take advantage of the Wii U’s hardware, and runs at a smooth 60 fps with no interruptions. The textures on some of the surfaces in the game, like the bridges for example are quite detailed; the shading is also well implemented in the more enclosed areas like the tubes in Windy Hill zone 4. While they did go for a more simplistic looking Sonic this time around, the finer points of the environments were handled with care.

What is also worth mentioning is the design of the enemies themselves. It was nice seeing throwbacks to badniks from Sonic’s past. It was a joy to see enemies like ballhog, mushmeanie and dragonfly return; and while the positioning of the enemies in many areas was handled poorly, Sega did a good job making them challenging. Instead of just being cannon fodder, they could pose an actual threat.

The Story in Sonic Lost World is much like any other Sonic game, full of humor and charm. Sonic and Tails chase Dr. Robotnik down as he carries a pod full of their animals friends. In his attempt to escape, he fires a laser at their plane causing them to crash onto a world known as “The Lost Hex”. Once they land, they’re pursued by creatures known as the Deadly Six, or zeti as Robotnik refers to them.

It’s Sonic’s job to save the Lost Hex and the world from these malicious creatures. While some of the Deadly Six were derivative and unappealing, most of the characters in the game were likable. Zor was perhaps my favorite of all the zeti, his constant existential brooding and reluctance was funny; though this may be due to the fact that I’m a pessimist too. Dr. Robotnik is his usual charismatic and funny self; he frequently mocks the Deadly Six, ordering them around in his bossy and crabby attitude. The only complaint I have is they try to get a little too serious by the end, clashing with the initially comical and upbeat attitude of the story.

Sonic Lost World is a game that had much potential, but ended up being a rushed and faulty entry to the Sonic series. While the aesthetics and story are very appealing, the gameplay is indeed a huge step backwards. With more polish and less gimmicks, this system that Sonic Team has applied to Sonic Lost World could work out wonderfully.

Well, my name's Christopher Deleanides as you all know and I'm the Nintendo Editor here at BG. I've been playing video games since 1992, and I've been a Nintendo fan the entirety of those years. My love for video games as well as Nintendo hasn't changed, and probably never will. The only thing that comes close is politics, as I'm very deeply involved in both local and international issues.
Previous Final Exam co-op trailer kills like, a billion monsters
Next New art and screens released for Baldur’s Gate II: Enhanced Edition