World of Warcraft: Vol’jin: Shadows of the Horde (Book) Review 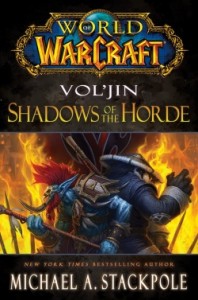 In this day and age, books are becoming less and less physical and more digital. As technology continues to spread to more and more people, apps begin to replace integral parts of society. What was once a mom and pop bookstore is now available from amazon.

I can understand why many don’t like to see this happen but I was surprised to see it still hasn’t encompassed the most technological of genres. Video game literature is nothing new, due to the fact that developers invest hundreds of hours in their virtual worlds and as such want you to learn everything about them. Such is the case I found myself with a World of Warcraft book in front of me. I was surprised they continued to milk the franchise but also by the fact that they haven’t made this an eBook purchasable from Blizzard themselves. Nonetheless, I must review this if only for more review copies.

Before I go too in depth, I must say this book will only appeal to you if you are already a WOW fan and appreciate the backstory and setting. If you have never had any contact with this MMORPG, then I don’t suggest you start reading just yet. It’s a very content driven novel and will require you to search up a few things you might not understand. Names and places are a bit hard to read with apostrophes and consonants and letters but don’t fret, they become a blurb in your mind when you skim over them making it a much more fluid experience.

The whole story takes place mostly in Pandaria (China populated with Pandas), with some minor flashbacks to other areas and events. The book is in third person meaning you jump from character to character seeing the story through their different viewpoints and experiences. Speaking of characters, there’s 3 which you really need to care about: Tyrathan Khort, Chen Stormstout and Vol’jin; a human, panda and troll, respectively.

Not wanting to spoil too much of the story, Vol’jin gets attacked by some assassins and ends up being rescued by his old friend and now brew master Chen. They then go to ancient monastery wherein they meet Tyrathan. One quick recovery later, they find out they must singlehandedly defeat an oncoming army of Zandalari. A pretty generic buddy team story, I doubt you can’t figure out how it ends.

The novel itself is written with an average use of language meaning literates can more or less understand the story. There’s quite a bit of imagery making sure your imagination doesn’t go unused too. The text in the print version is pretty big making me think they were hoping to market this to younger readers.

All in all a pretty decent novel especially with its use of the WOW universe. If you are still a fan, then it wouldn’t hurt to give this a try especially if being maxed out on level 90 makes the game a bit of a cakewalk. Hopefully the sequels by Michael Stackpole will add to this series and make this the Harry Potter of gaming fiction.

A young lad on a magical journey through the dark and terrifying world known to many as "the industry". From his hellish prison, Isaac can hear the cries of pain and suffering from those who came before him, only to hear their hearts stop in utter terror. Video games aren't all fun and games kiddies.
Previous New Assassin’s Creed IV trailer shows off a heist, pirate style
Next Magnetic Realms’ Inescapable releases today