Growing up in an era where you had the choice of being either a Sega or Nintendo fanboy, I was always the odd one out, and with good reason. 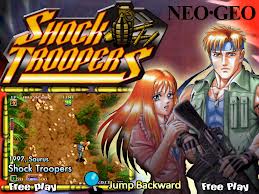 The Neo Geo AES home system has been, and will always be my most loved gaming machine, so much to the point where I purchased one again a year ago, for £200 (SHUT UP!!! IT WAS WORTH IT.) There is one game in particular that always stood out for me, and that was Shock Troopers, an 8-way run and gun shooter similar to Mercs, which was released for the Sega Genesis in 1991.

The basic plotline involved a scientist and his granddaughter being kidnapped by the evil organisation, The Black Scorpions, in order to obtain the Alpha-301 drug to transform themselves into superhuman soldiers. It is down to you as the main player to shoot and bomb your way through hordes of enemy soldiers, Rambo style. You have the choice of eight soldiers from different nations, each with their own special weapons including, Jackal: USA, Milky: French, Loki: Norwegian, Southern Cross (Fist of the North Star reference?) Australian, Marie Bee: Russian, Rio: Brazilian, Maru: Japanese, Big Mama: Canadian- whew! I think that’s all the continents covered.

Before starting the game, you have a choice between two game modes, Lonely Wolf, and 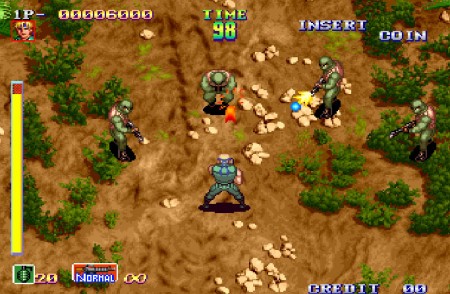 Team Battle. In Lonely Wolf mode, as the title suggests, you control one character through six stages, however in Team Battle you can switch between three soldiers of your choosing by pressing the D button while in the middle of gameplay. The advantage to this is that you have a wider range of special weapons with each character getting 10. The downside to it all is that you get fewer lives.

The gameplay mechanics are as simple as you can get, you use the joystick (or analog stick, for those of you that are too young to remember the brilliance of joysticks) to move in eight different directions. There are four different buttons for firing, dodging, special weapons, and (as mentioned above) a button for switching characters in Team Battle. While holding the fire button, you can use the joystick to strafe left to right and if you get close enough to the enemy you can slice and dice them with your combat knife, Metal Slug style.

At the beginning of the game you have the option of picking three different routes, Mountain, Jungle and Valley. Each of these determines what path you take through the stages to get to the organisation HQ. You do have the option of switching routes halfway through the game, but I always stick to the mountain path, only because I love the helicopter boss battle on the first stage. As with most Arcade games of this era, each stage ends with a boss battle and it all ends with a fight on top of an aircraft with the commander of The Black Scorpions.

The soundtrack features a lot of drum and bass, now I’m going to be completely honest with you, I absolutely hated drum and bass back in the 90’s, but playing the game now and listening to the soundtrack… I kind of like it. But I’ll just put that down to nostalgia more than anything else.

I can honestly say that while growing up, most of my fondest memories as a gamer comes from playing the Neo Geo. And no, this isn’t nostalgia speaking right now. As I mentioned above, I still play it and I have an original copy of the game too (which I also paid an arm and a leg for) and I’ve never had this much fun playing a game in such a damn long time. It gives me plenty of enjoyment that I just don’t get from most modern games- and that’s exactly what Shock Troopers does so well. It has a really bad plotline, but this was never a game about great storytelling, it’s about losing yourself in entertainment and playing a game with a big smile on your face as wide as a butt crack.

For those of you interested in playing this gem of a game, you don’t have to go to the extreme lengths I went to.. You can download via Virtual Console, and the plus side to it is you don’t have to waste all of your coins on purchasing credits to keep going.

I've been a gamer since I was a child (which is going way back when) the very first console I owned was the Sega Master System, during my time as a gamer I have pretty much come across nearly every console including the Bally Astrocade(which requiered cassette tapes to play games) so I have broad range of knowledge when it comes to video games. My favourite game of all time is between Shadow Hearts (a rare gem of an RPG released for the Playstation 2) and Final Fantasy VIII.
Previous The Doodler hops onto Windows Phone 8
Next Castlevania: Lords of Shadow- Ultimate Edition (PC) Review