Atlus and Vanillaware’s long-awaited Dragon’s Crown is a visual tour de force with enough hacking, slashing and role-playing to keep you busy for a long time. 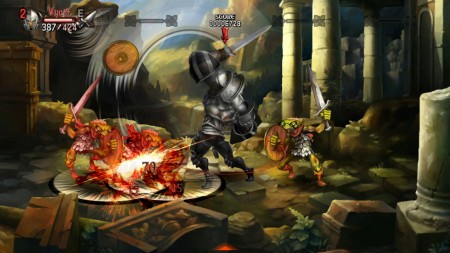 Those older D&D video games combined fairly simple hack and slash gameplay, with almost no real RPG elements, to create a whole sub-genre that allowed for a string of games that still are being pumped out today. Dragon’s Crown is one such game, but it’s head and shoulders the best example in years. Actually… maybe ever.

First up, there’s the looks. DC is drop dead gorgeous with stunning graphics, beautifully crafted levels and unique character design. When I say that DC is beautiful – I mean it. The game has a hand-painted feel to it that’s really something to see in motion. Colors pop and stages look like an art book in motion as you play. Really pretty.

Levels are well put together for the most part too with both classic dungeon and cave motif’s and some pretty original stuff like haunted towers and battles with giant octopi. There’s tons of stuff going on in those levels too as alternate paths and hidden secrets abound as the game moves forward. Secrets are everywhere as you play with glints of light giving away bonus items hidden about for you to tap on (more on that later) and add to your hoard- which you’ll need every bit of if you want to stock up on supplies and revive your fallen teammates if they fall in battle (they will).

And about those teammates, all of the characters in the game (both friend and enemy) are really cool looking and well animated. As far as playables, Dragon’s Crown gives you six characters to battle with: The Fighter, The Dwarf, The Sorceress, The Amazon, The Wizard and the Elf. Each one has their strengths and weaknesses and, most importantly, plays differently.

Some characters (like the Elf) are tougher to be effective with and are more suited to advanced players, while characters like the Dwarf and Fighter have an easier bent for beginners and those not used to the trials of a tough side-scroller. It’s really great to see so much diversity in a game like this where traditionally all of the characters play more or less the same. And I’m not just talking faster/slower here, these characters have different special moves and even some standard attacks that vary in more than just looks or range.

For example, the Dwarf has a ‘stone skin’ type move that allows him to pump up and increase his defense and he can also pick up and toss baddies around, which no one else can do. Major differences like that are things that you don’t really see in other games of this type and are beyond welcome additions to the genre. Up to four player or computer controlled characters can be on screen and quest together too, making for some huge battles. In addition, these four characters are then joined by a Rogue who can crack chests and door locks and (eventually) a fairy who points out treasures and hidden things for you.

Therein does lie one of the problems I had with the game though, because while a four-player party can do a lot of damage, it can also be very easy to lose yourself in on screen. More than a few times I had no idea where I was amidst the chaos of spells and sword slashes and special attacks going on. This was especially true for the Vita edition of DC, with it’s small screen. It’s not a game-breaker or anything, but it was definitely enough to bug me here and there.

Fortunately, moving about the 2D plane is easy. The analog stick is used to move, while attacking, defending and using special attacks are mapped to the Dual Shock 3 or the PS Vita’s face buttons. Using items isn’t quite as fluid, with consumables and such being relegated to the digital pad- which is admittedly kind of unwieldily. 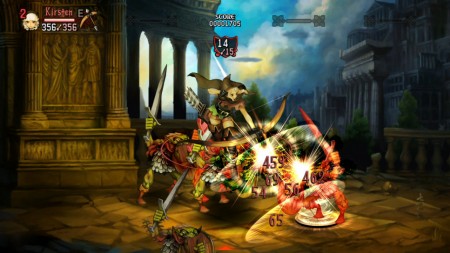 Then there’s the whole cursor thing. The right stick (or the touch screen on the Vita) controls a floating hand cursor that you use to ‘click’ on doors, chests and those secret objects that glisten in the background. It’s not that it’s hard to control or anything, the mechanic just kind of takes you out of the action and moving the story forward  for few seconds. It sort of breaks the flow to grab the treasure in this way, and you really can’t pass up on any of it if you want to progress easily.

And you will, as the story is surprisingly deep for a game like this. Events center on the mystical Dragon’s Crown, a relic from a past age that can allegedly control the minds of dragons. The country of Hydeland, which is where you are, is starting to see Orcs on the move and the state to the north start to threaten its boarders. That causes the King to quest for the crown; a venture that sees the monarch go missing. There are actually a good number of twists and turns from there and some really neat developments and characters that you meet up with. 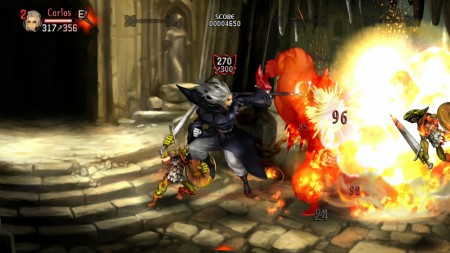 You might not remember it at times thanks to the non-stop action, but Dragon’s Crown does have some role-playing going on. Not only do you level up your main character, but you can also buy and sell magic, items and weaponry. As you adventure, your hardware will also wear down and you’ll have to have it repaired in town. The town that you can visit is actually pretty well realized with the stables (to get a horse), a magical gate that’ll take you all over the world, the adventurer’s guild and the tavern – that’s where you hire on A.I. companions.

There’s also a temple where you can revive the long-dead bones of heroes that you find on your quests, which is where your computer controlled partners come from. All of this costs gold though, sometimes copious amounts. And as the game goes deeper it can get very expensive very fast. I found that I really needed to start paying attention to what I was doing and how much gold I was spending as I got stuck questing (and losing) alone thanks to some bad choices in town.

Dragon’s Crown isn’t without its faults and does have some issues here and there, but it’s a terrific time overall.

The graphics and overall design of the game make it a treat for the eyes, and the controls and sheer amount of what you can do make it worth going back to again and again. It’s true that things probably could have been streamlined a little more and I felt like developer Vanillaware tried to do almost too much at times, but none of the little ‘issues’ I mentioned ruin Dragon’s Crown in any way.

It also should be mentioned that DC features a cross-save feature (meaning you can play at home with your PS3 and then on the go with your Vita), but not a cross-buy option. So in short, though you can play the same quest from either, you don’t get the Vita version of the game if you buy the PS3 version- or vice-versa.

If you’re a fan of the arcade or 16-bit era of the side-scrolling action title, or the fantasy universes of Lord of the Rings and Dungeons & Dragons, then Dragon’s Crown is really a game that you shouldn’t miss out on. However you search for the Crown, at home or on the go, this is one quest you should wholeheartedly accept.

Jason's been knee deep in videogames since he was but a lad. Cutting his teeth on the pixely glory that was the Atari 2600, he's been hack'n'slashing and shoot'em'uping ever since. Mainly an FPS and action guy, Jason enjoys the occasional well crafted title from every genre.
@jason_tas
Previous MattyCollector MOTU and DCU subs close in on final days
Next Grand Theft Auto Online to be revealed this week